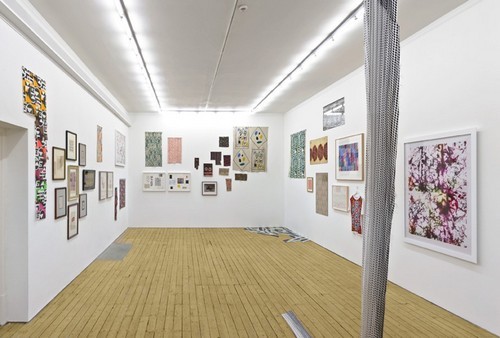 Dogtooth and Tessellate is an exhibition about pattern. According to the early twentieth century German theorist, Wilhelm Worringer, it is ‘of the essence of ornament that in its products the artistic volition of a people finds its purest and most unobscured expression.’ Worringer’s ‘psychology of style’ in Abstraktion und Einfühlung (Abstraction and Empathy, 1907), identified the Middle Ages as the point at which geometrical ornament ‘devoid of meaning and expression’ moved from the borders to fill large areas and become ‘an autonomous and self-sufficient main motif of decoration’. As woven and printed designs evolved with mechanical production their visual character was traced back to ideas that predated art. A popular 19th century calico pattern produced in Lancashire called ‘Lane’s Net’ was seen to originate in the Sandstone fossils of extinct corals. Microscopic and X-ray technology revealed infinite variations of geometric structures within nature. Spirals, checks, honeycombs, cobwebs and other motifs were identified within the recurrent imagery of ‘form constants’– patterns produced psychophysically in response to stimuli such as stroboscopes or hallucinogenic drugs. The Greeks in antiquity are said to have rubbed their eyes to stimulate these psychedelic phosphene visions, and historians have speculated that Paleolithic markings were inspired by such retinal phenomena.
Pattern, as part of a visual vernacular recurrent in art and ornament forms the basis for a total scheme that combines work by over twenty artists and designers whose work has been applied to this area. Dogtooth and Tessellate will include painting, drawing, sculpture, wallpapers, textiles and other objects produced from early 20th century to present day. Patterns produced by artists as self-initiated commercial ventures in fashion and decoration such as the Omega Workshops, Sonia Delaunay’s Atelier Simultané and Eduardo Paolozzi and Nigel Henderson’s Hammer Prints will be shown alongside designs commissioned by industry from Henry Moore, Raoul Dufy, Salvador Dalí and Humphrey Spender. Beyond decoration, the exhibition makes reference to the application of pattern in optical schemes intended to disorientate in conflict or designed to encode discreet political or commercial messages. Similarly, the proliferation of ornament stamped and printed upon surfaces in the modern environment links the practice of contemporary artists such as Amanda Ross-Ho, Alice Channer, Sean Edwards and Matthew Harrison. Dogtooth and Tessellate will employ the architecture of The Approach’s E2 gallery to produce a visual index of pattern sampling from a history of production and consumption in the modern age.
www.theapproach.co.uk