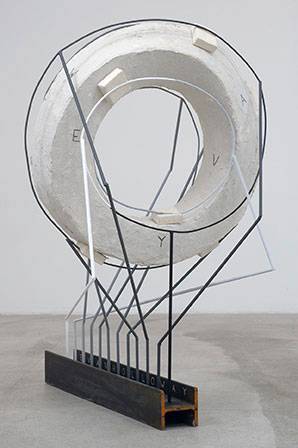 Holloway's sculptures are engaged with the corporeal and all its qualities. His current works take organic and modernist structures as frameworks for his idiosyncratic mind maps of sculptural history and human experience. There is an ongoing meshing of formalism and figuration, which interweave a sense of collective and individual responsibility.

The concept of the 'Analog Counterrevolution' asserts the primacy of the physical over the purely information based, allegedly frictionless, digital era. 'Power' is made up of used batteries imbedded in plaster. These redundant objects are the toxic residue of a consumer society. Over time they will leach into the plaster, turning it various colours and possibly growing acidic crystals. The idea of a chain of production is a re-occurring theme. In 'Capital' a group of miniature people populating a tree like structure are linked in a hierarchical web of excretion and consumption. 'Robot' can also be seen as a waste producing machine; with the aid of the audience a ball simply travels through the sculpture, going in one end and coming out the other. Holloway encodes his multi-piece sculptures with body parts, colour codes and metal structures that re-appear in various combinations. The kinetic element is also apparent in two small sculptures that once cranked up, incorporate slight clunky motions with their body parts, performing simple abstract dances.