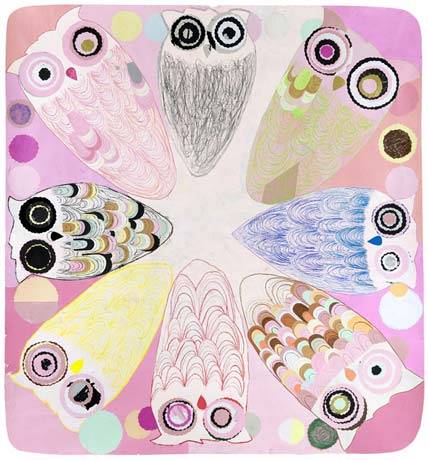 Evren Tekinoktay collects popular images from the media and her family’s photo albums, which she subtly re-draws and re-presents in a complex iconography about growing up in the 1970s and ‘80s. Rather than offer the familiar feminist critique of sexism in the media, Tekinoktay traces a historical shift in female identity without judging its protagonists, or its outcome. Woman becomes a curious creature that appears in many forms, both familiar and made new by Tekinoktay’s collages. Some of the source imagery is drawn from a parallel project she has undertaken - the opening of her shop 'Tekinoktay Lingerie'‚ based in her hometown Copenhagen. The shop itself is like a collage which brings alive a crossover female universe.

Tekinoktay often builds up layers of images, which she paints over and draws into. Other works on paper, made from fewer elements, are just as complex in their iconography, as Tekinoktay deploys paper like paint and its shapes like a dialect derived from the visual languages of art history and pop culture. Simple cutout forms, powerfully and ambiguously suggest fairytales being retold through imagery both humorous and melancholy. Creatures that Tekinoktay identifies with a mystical power, such as the owl often appear alongside the female form. In ‘Owls’ (2005), colours and patterns are built up like a patchwork quilt, the ring of eyes are a frequent motif in her work that echoes the protective and ominous ‘evil eye’. Tekinoktay draws on the symbolism of her Turkish family origin and playfully mixes this in with a secret history of femininity. The result is a potent, bold and subtle invocation of colour and form.