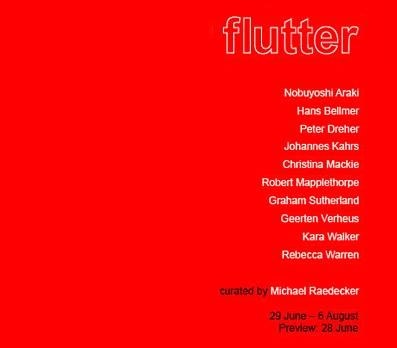 As the exhibition's title suggests, Flutter is concerned with a perceptual space in which the eye and mind travel hither and thither, an arrhythmic experience in which explicitly sexual objects and images cross-pollinate with those that posses an odder, less obvious charge. Flutter is the flicker of a lover's eyelash and the throb of an uncertain heartbeat, a show in which fascination and trepidation combine and the placement and juxtaposition of works result in subtle games, unpredictable infections and perverse couplings.
Featuring works in various media made between the mid-20th Century and the present day, Flutter flits between the figurative and the abstract, the dignified and the abject. The viewer might identify a notional `couple' in the pairing of Robert Mapplethorpe's famous glossily priapic version of Man in the Polyester Suit, untitled (Milton Moore)(1980) and the woman in Johannes Kahrs' poster Untitled (1997), whose fulsome pubic hair recalls Gustave Courbet's notorious painting L'Origine du Monde (1866), (and extends Flutter beyond the gallery's walls with copies fly-posted around the neighbouring area). Hans Bellmer's drawings for the 1959 publication A Sade see corporeal instability set in, depicting human bodies as ravaged landscapes whose every crease and aperture is a potential site of congress. Elsewhere, Christina Mackie's skewed geometric composition Homerton Park Nightmare (2003) plays with the fatal attraction of the frame, Peter Dreher's serial paintings of a single water glass hint at sublimated obsessions (Dreher has been working since the mid `70s on Tag Um Tag Ist Guter Tag, Day For Day, Days Are Good, and has painted almost 2000 near identical water glass paintings!). A photograph of a rosebud by Nobuyoshi Araki provides an almost-innocent note from an artist who is a by-word for compellingly insalubrious sexual imagery, and (as if to underline the exhibition's dark, looping sensuality) Geerten Verheus' kinetic sculpture Lengths - by and large (2006) slowly winds itself up until, unable to take any more, it finally shudders in grateful release, only to begin this Sisyphean process once more.
Michael Raedecker was born in Amsterdam and lives and works in London. Recent solo shows include `up', Andrea Rosen Galllery, New York; `show', Hauser & Wirth, Zurich and Douglas Hyde Gallery, Dublin. Raedecker was nominated for the Turner Prize in 2000. Flutter is his first project as a curator.
www.theapproach.co.uk