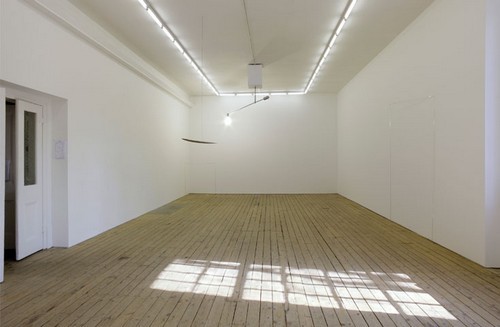 The Approach is pleased to announce the second solo show in the gallery by Germaine Kruip.

The works of Germaine Kruip can often be described as stages – spatial interventions wherein the viewer becomes the actual agent of the work. A Room, 24 Hours consists of a light bulb that slowly moves in the space, drawing one big circle of light in exactly 24 hours. The work makes a reference to the passing of time in the natural world and gives the public a subtly different view of the exhibition space throughout the course of the day. It makes the audience aware of the act of looking – viewing a situation at a specific moment – making visible the temporary relationships between the space, the object and the viewer. Other works in the show use mirrored glass sticks to delineate and punctuate perceptual space, forming lines that shift perspective or reflect back their environment. The sculptures come into form through their attachment to the room, as they are responsive to the architecture, the shifts of light, and the spectators’ viewpoint.

The Steel Ellipse work continues Kruip’s interest in the combination of artificial and natural phenomenon. Nature and culture, science and intuition, light and reflection; Germaine Kruip combines these opposites in imagery to result in new works and shapes, in this case the ellipse. The meaning of the elliptical shape, one of the figures in geometry, leads back to the signs and symbols of ancient philosophies of life wherein the balance between opposites is made visible, such as yin yang, the sign of the cross, the spiral shape and the cosmic egg. Constantin Brancusi introduced the egg shape (ellipse) in sculpture and Piet Mondriaan, saw the ellipse as the figure of the fundamental and total unity of antithesis. In a grammatical sense, an ‘ellipsis’ is an omission, the parts that have been left out can easily be reconstructed using the situation and context.1 A Room, 24 Hours rotates so slowly over the time frame that you don’t actually see it move, but the title allows for a mental picture of the movement, and for a sense of its occurrence when you are not present. This exhibition is by definition also about the hours you don’t see, the light that contains the room in your absence, the shadows that are staged and caused spontaneously by the natural light that enters the room at different points in time.