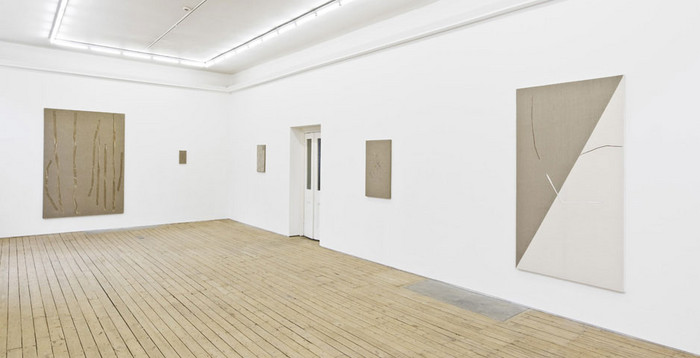 The Approach E2 is pleased to present the first solo show in London by Helene Appel.

Helene Appel’s paintings explore the line between gesture and form. Natural and casual representations are made to relate to the processes of abstract painting. The representation of low value objects stands in for different painterly actions, and each tests its’ competence to replace or dominate the other. Within the paintings in the show there are different actions referenced; the abstract mark, the act of writing, as well as the more casual gestures of placing twigs and discarded tape or the sweeping of debris on the floor. Helene Appel brings abstract painting into an unexpected proximity with the domestic realm, there allowing it to work subtle destruction.

The precise beauty with which the objects depicted in Appel’s paintings are rendered is in some contrast with the ephemeral and everyday nature of the objects themselves. Still whole in themselves, otherwise apart from a wider pictorial narrative, abstracted objects are held by faint shadows only slightly off the surface of Appel's often un-primed canvases. The transient discarded nature of what is depicted lingers like a faint after-image of an ever-interchangeable multitude around the unique and slowly worked representations. Similarly, the faint after-image of abstraction, and a kind of informal casualness, lingers around the flat distribution of these depictions and other painted marks and stains, outshone by the strict formal complexity of Appel's compositions.

The title of the show ‘Assistant’ references a key ambiguous transaction in Appel’s work. It is not clear who is assisting who – the object, the painting, the viewer. Objects that people usually handle but don’t look at are activated by their being studied and presented here. In ‘the Waitress’ a domestic plate acts like an eye staring back at the viewer, and the canvas itself doubles as a tray for the plate. ‘Cleaner’ takes the form of a rag that is used for mopping the floor, with the holes in the canvas acting as worn away spots. In the moment where Appel chooses what stays on the canvas and what is removed she invests value into the object she depicts and lets the object interpret and subvert the abstract convention. The crumple of the brown tape disrupts the depiction of the abstract line and reflects its own materiality. ‘Tender leaf salad’ depicts carefully laid out lettuce leaves that appear like they might be spelling out words. Formally arranged at the top of the raw canvas, they capitalize on the economy of what is represented and what is read by the viewer. There is no text encrypted and it is the form of the leaves that end up displaying a visual language of their own.
www.theapproach.co.uk