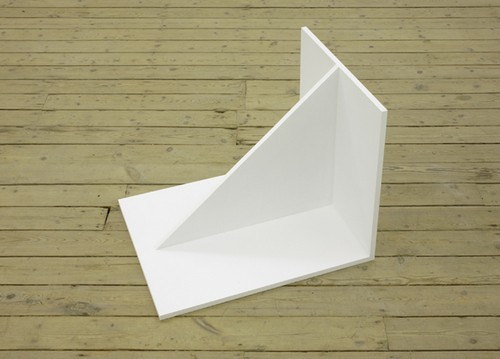 All three artists in Spoils & Relics are involved in a constant process of de-constructing and re-constructing imagery. Motifs from earlier works often appear recycled, as everything, including the artists' own practice is potential source material. The rejected or negative space generated from one work can become the found material for the next. Through a choreographed investigation of display there is a questioning of methods of producing and exhibiting artworks and a semiotic exploration of the relationships and hierarchies between fragment and whole, individual and totality.

Henning Bohl's composition is formed by the application of commercially produced coloured paper on to primed canvas. The 'painting' reveals its own sculptural materiality by the way Bohl applies the paper to the canvas, in parts curling and folding away from the picture plane. Bohl also uses the negative residues of cut out paper forms and in doing so develops an economics of image production, activating logic of its own process. The fragmented imagery that this composition draws from originally referenced images of Japanese Kabuki masks. Bohl uses the elements of a portrait to create a non-portrait format. Works have become increasingly abstract from one to the next, in a self-referential history. The canvas becomes a stage where the abstract elements echo back these figurative signs of theatrically staged psychology - a line of a smile, the circle of an eye are revealed as dominating constructions of vision and perception.

Amanda Ross-Ho's cut canvas works transform imagery through sculptural negotiations. These cut outs are made from canvas drop cloth coated in black latex. The images are translated from photographs of vintage macramé. The result is an interlocking system or totality that contains potential for mathematical geometric structures as well as more organic or free forms. The process finds parallels in other modes that employ direct manipulation of linear elements into legible forms such as drawing and writing. Considered formally, these works compound flatness, reversing the white and black macramé image to black and white as if in a photographic negative. They depict gravity and also speak about the paintings' gravity in relation to the wall. The installation cross pollutes sites of production and sites of presentation by integrating elements that anchor the work to these realms or introduce transparency between the context in which the work was made versus that in which it is presented.

Michael Hakimi's work explores the threshold of representation. The narrative potential of basic geometric forms is investigated, rotating and manipulating segments that materialize into new matter. Some works lean on the wall, some attach to it, others are freestanding, playing out different possibilities of basic display. Scale is manipulated and fragments of images as well as residual and edited images become the subjects. A cut out MDF shape stands with a two-dimensional front but its reverse reveals a theatrical support reminiscent of an advertising prop. The section of the letter 'A' painted on its surface creates a phantom reference to a larger whole that is missing or in fact never even existed. The graphic representation of the edge of the letter appears stronger than the white edge of the physical sculpture itself. As with many works in the show the simplicity of shape, line and form create a flattening effect but despite the destruction and removal of information the image remains symbolically loaded.

For further information please contact Emma Robertson at The Approach