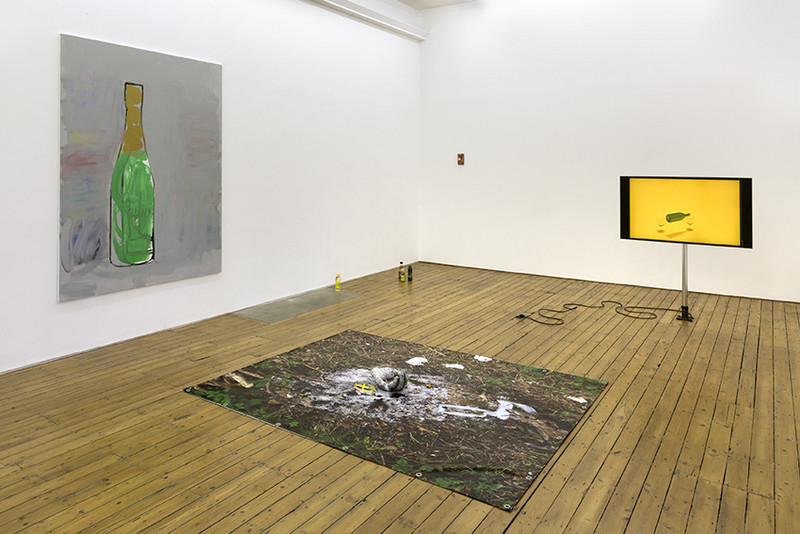 Leftovers, waste and residue are the themes of Is this living?. Dealing with the cyclical nature of commercial production and use, the show uses food consumption as its primary allegorical device. Here we see the works of nine artists who engage with consumables or their repellent yet strangely compelling by-products.

Stuart Cumberland’s painting Gas Burner, provides the essential kitchen equipment used in the preparation of food. From the simplified black and white stovetop, emanates the painted blue flame of a lit gas burner, offering an incendiary preface for the exhibition. Hayley Tompkins’ bucket, Picture Pail, a receptacle potentially filled with waste or liquid, transcends its use as a tool for cleaning-up. From the bottom peers the face of a model on a torn out page of a magazine- alluding to a different type of commercial consumption. Cardboard fruit boxes have been repurposed as surfaces for Charles Mayton’s painted works, Ort. Each depicts a grimacing bacchanalian character with mouth wide open, seemingly ready to devour whatever it encounters.

Human presence is conspicuous in its absence in the paintings of Helene Appel, Untitled (Sweepings) and Shin. The physical remnants, traces of dirt and meat indicate cleaning and food preparation tasks left midway through. Appel’s absent figure is akin to the invisible characters, drinking invisible wine on an endless loop in Oliver Sutherland’s video, Drinking Drinks. Over-excess is also evident in Stuart Cumberland’s oversized bottle of champagne, marking the beginning of the end of a narrative punctuated with Puppies Puppies ice tea bottles filled with the urine of the artist and his gallerist.

Jack Lavender’s vinyl banner, depicting a spent campfire littered with half burned packaging, is evidence of the detritus of consumerism found in every modern wasteland. The banner doubles as both image and framing device for a selection of sculptural objects cast or found by the artist. Similarly, Holly White’s hanging transparent pocketed sheet displays types of discarded objects that point to the everyday use of commercial goods. In comparison, Hannah Lees’ hanging bone works utilise traces of consumption from the past. Combed by the artist from the banks of the Thames River and recycled into hanging sculptures, these works make visible remnants of life that might have been buried and forgotten.
www.theapproach.co.uk