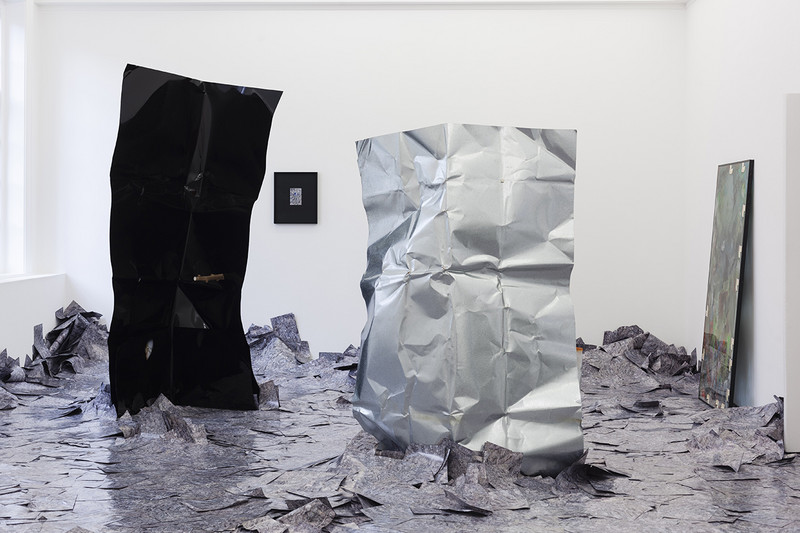 The Approach is pleased to present London-based artist Jack Lavender’s second solo exhibition at the gallery.

Lavender has developed a series of free standing sculptures made of self-supportive folded and bent painted steel sheets. The exhibition also includes new double-glazed units and wall-based grids made from rebar and found and collected objects that form part of Lavender’s ongoing practice. These will be shown alongside framed collages of found imagery and personal photographs. The floor of the gallery has been covered with tens of thousands of overlapping sheets printed with an image of mud tracks taken by the artist, seen as a way to display ideas of preservation, transience, repetition, and the passing of time. The repeated image forms the impression of a terrain to be negotiated. However, the illusion is disrupted when the papers shift and slip as visitors make their way through the gallery.

Lavender is constantly inventing new sculptural frameworks for his assemblages of images and objects: from rebar grids to double-glazed window units to the most recent steel structures. These constructions are holding grounds for Lavender’s interest in concepts and layers of time: memory and nostalgic visions of the past and the future in popular culture. This underlying interest is reflected in the images and objects the artist incorporates into his work, such as stickers, posters, cheap simulacra, snack and drink packaging, drawings and found and collected detritus.

Evoking multi-layered narratives, Lavender shows how in our consciousness, imaginations of past eras exist simultaneously with our personal histories, the present, our plans for the near future as well as ever-evolving imaginations of the more distant time to come.