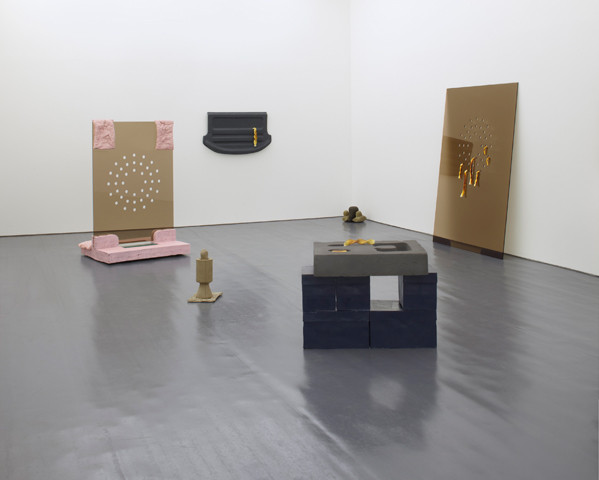 The Approach is pleased to announce an exhibition of a new sculptural works by Martin Westwood.

Westwood has populated the gallery space with a grouping of sculptures that take as their source material types of superfluous, peripheral objects that are readily found in everyday day life. Plucked from the realms of office industry, commerce and travel, he chooses forms that have evolved to perform highly specified functions. Shown as press casts and exaggerated reproductions of the originals, the surrogates of an inflatable travel pillow, the parcel shelf of a car, boxes of A4 office paper, thick sheets of partition glass used in banks or post offices, a charity collection box and puff pastry. One step removed from the original, the replicas, when elevated to the status of art object, are tinged with a precious, surreal quality. The viewer is not encouraged to believe that these are stand-ins in terms of function. Westwood renders them devoid of any purpose other than sculptural, highlighting their tentative place within a new system of objects. He simultaneously draws attention to the both the original objects’ loss of function and their newly attained value as artwork.

As sculptures, with parts cast and made in clay, polyester-resin, fibre-glass and glass, they appear rudimentary, at once both blatant and secretive, dwelling in an outpost of whimsy. The oven baked casts of puff pastry act in an almost parasitic way, twisting and unfolding over, under and through the surface of the sculptures, to create an aesthetic link in what could superficially appear to be a motley assortment of objects. Heavy-duty grey vinyl flooring, an industrial, membrane surface that feels oddly at home in the gallery achieves a similar effect. It is a carefully considered ‘neutral’ platform upon which these sculptures convene, redundant in terms of industrial use, but because it supplants the original natural wooden floor of the gallery, it conveys the same dummy-like blankness that is akin to the cast and reproduced objects which compose the sculptures themselves.

Throughout ‘Boneus’, Westwood departs from previous practice by relaxing a self-imposed tradition of making work laden with more readily apparent layers of narrative. This departure is perhaps emphasised by the conspicuous lack of a more literal figurative element, which is often found in his previous bodies of work. In turn, the work’s interpretation has become more open ended and the figurative element is transferred to the viewers themselves. The sculptures’ arrangement purposefully rejects the familiar centeredness of a viewing subject by placing the works in a gathering reminiscent to a stage set. The placement works against a traditional curatorial model, which chicanes the viewer into predetermined paths around the space and instead, forces us to confront a set of strangely connected works head on. As a group, they have effectively separated themselves from the audience, meaning that one is forced to choose between butting a way in or remaining a voyeur. Once navigated, we are embroiled in the artist’s ultimate concerns with the relationship between the objects themselves rather than that of the object to viewer, or object to space. The relations they set up between themselves appear obtuse, perverse, enigmatic and riddled with secrecy. As objects, that Westwood describes “as riddled with noumenal difficulties that collapse into their own economies”, they exist as fossilised monuments to the experience and memory of the contradictory phenomena of exchange.