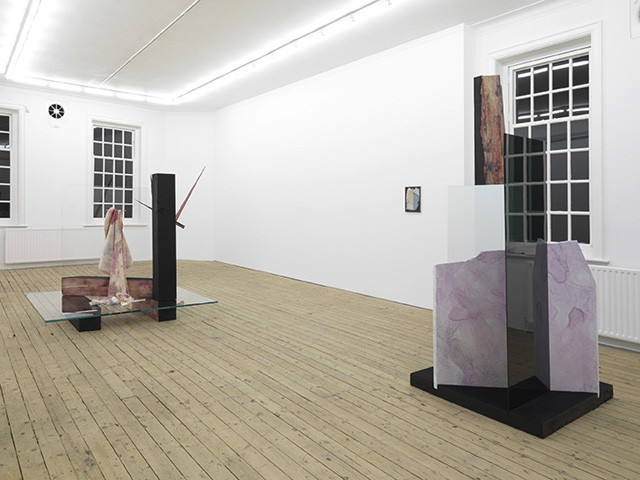 The Approach is pleased to announce Patrick Hill’s second solo show in London.

Patrick Hill’s work explores the relationships between two and three-dimensional space, where meaning is created (and resides) and where it disappears– both visually and conceptually– as well as the history of abstraction and pop in painting and sculpture.

In both the sculptures and paintings, a view of the ‘whole’ is never a possibility. The paintings are sometimes covered in heavily applied concrete, disallowing the ‘paint’ to be entirely seen and bringing them closer to relief. The sculptures are very much made to be seen in the round and cannot be viewed in totality from any one angle. The layers of materials (marble, two-way mirror, canvas, concrete, wood) form and re-form entirely from different perspectives. As one physically navigates the work, what is seen shifts alongside the potential for conceptual shifts. P.O.V. and one’s subjectivity (both the artist’s as well the viewers’) are integral to the production of the finished work.

The gesture of minimalism creates a reductive focus in which formalism and concentration suggest the violent potential of elegance as aggression. Moving beyond sheer formalism, Patrick Hill’s sculptures and paintings pervert the notion of the “formal” as a limited space without the potential for other references. Concrete (and in some cases spit and hair) on canvas can be seen as scatological and abject as much as abstract. ‘Oriental’ (one of three sculptures in this exhibition) suggests not only perspective but also the aesthetic connotations of the othered lines of eastern culture, engaging with the desirable and the problematic. Hill’s sculptures are as much about fluidity and the disintegration of nature and the body as they are about edges and sleek geometry. ‘Ruins’ suggests a staged impermanence and potential decay as well as architectural folly. The pink/purple/blueness of flesh and body are reoccurring themes in the work. The angular and exotic bouquet ‘Bird of Paradise’ is made from splinters from the larger work (Ruins) that were hacked away, one created from the other’s shards in a direct symbiotic relational process between the two.
www.theapproach.co.uk