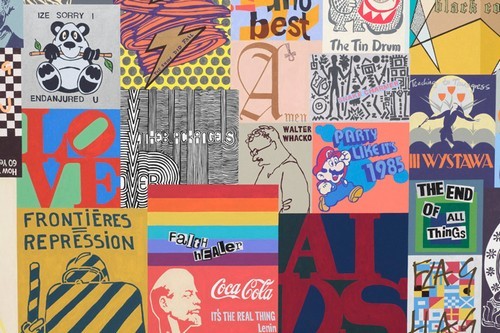 The Approach is pleased to announce that it now represents the British artist Peter Davies. Having hosted Peter Davies’ first solo show in London in 1998, this will be the artist’s second exhibition at the gallery.

The tongue-in-cheek title of the show – “The Epoch of Perpetual Happiness”– shares its name with one of three new paintings in the exhibition. Each work belongs to a different ongoing series and functions as a different idea or proposition of what might constitute a painting. Put together, the paintings question and reaffirm the status of one another, whilst individually they each offer a different visual experience. Davies’ vast large-scaled works are never straightforward; they are knowingly referential, enjoying the art historical tangles and loose connections they create, and their appearance often provides a visually deceptive logic of composition that conceals hidden structures. Elements of repetition, labour and of systems being followed and then breaking down or being adhered to and then overlooked persist in all of the paintings. The works also share a multi-coloured hippie flower-power sensibility that belies their real interest in exploring the cliché of failed utopias.

Taking Colour Field abstraction as a point of departure, “Small Touching Squares–Diagonal Overlapping Rectangles–Painting” consists of thousands of tiny individually hand painted squares obsessively covering the entire surface of a large canvas. The intense, vibrating op-art effect is offset by the wonkiness of the squares and the surface resembles a knowingly DIY Bridget Riley. The painting is like a slow motion private performance, reflecting the artist’s life during the long period in which it was made. The apparent mistakes and inconsistencies of the work also reveal the history of its creation and no two works from the series could ever be the same.

“Caliban Tamil Fuckers–Subliminal Message Series” is the first painting in a new series. The work resembles an all-over abstract expressionist painting but the way in which it’s made contradicts its appearance: slowly, carefully and precisely, using a ruler and completely free of drips. It resembles a scribble or an "etch-a-sketch" drawing and is interested in creating a visual equivalent of progressive experimental noise music. “The Epoch Of Perpetual Happiness” is the second work in a trilogy of paintings that re-appropriate contemporary pop culture iconography. The graphics of counter culture, once invested with desire and hope, now saturate our visual memories to a point of redundancy and banality. Davies initially makes small collages that mine the aesthetics of posters, bumper stickers, fliers, record covers, t-shirts, punk graphics and socio-political slogan art, all leveled by the graphic flattening of an ever-consuming society. Davies invents, re-samples and patchworks the imagery and slogans together in a composition that appears to rely on arbitrary stream of consciousness logic, but the dense figurative imagery contains an underlying abstract rectangle structure inspired by Ellsworth Kelly. The final extra large painting resembles folkish handcrafted signs and the use of appropriation results in paintings of paintings within a painting. The work is rich with parodies and homage, and full of hidden codes and references that include: