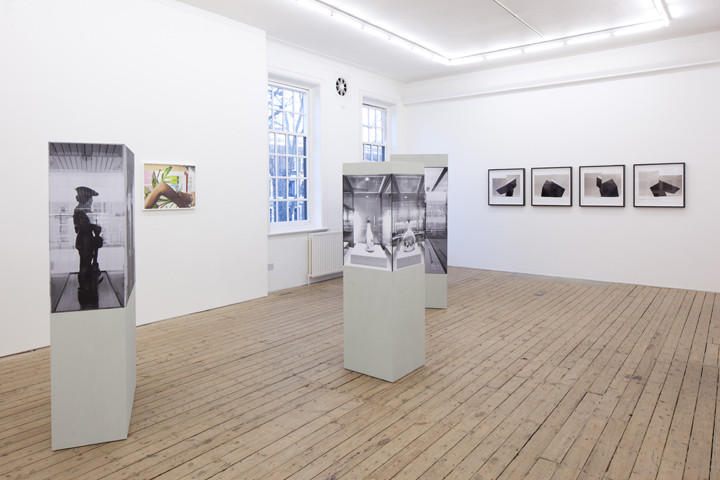 'Recto/Verso' is an exhibition that looks at the way six different artists engage with photographic image making and the ambiguous perceptual relationships between object and representation. Be it through contingency, staging, iconicity, or imagined physicality, there is an investigation in to how we read and experience images.

Michele Abeles’ Day-Glo tableaux vivants avoid narrative reading, with titles that are an inventory of the elements included in the image. Her anonymous subjects, including classically posed males in recumbent poses and desexualized bodies, appear with the same image value as the other props she composes. The objects are chosen for their ‘blank’ quality, making them free from specific association, and creating a leveling effect. Each of the elements has a radically different relationship to the surface of the image, so much so that the ‘layers’ often work to flatten the picture. The compositions themselves are not random, but have an awkward character, as if we are only seeing a cropped section of an image.

Starting from the early 1960’s Robert Heinecken used an array of unconventional processes and an irreverent attitude toward the photographic original to influence the course of the art form. He had an interest in the currency of the image both in terms of economics and time frame. Heinecken’s ‘Possible Print’ photograms (1987 - 1996) were made through a contingent process whereby a single page from a mass circulation magazine was backlit so that the reverse page merged with the front. He then re-photographed the page, superimposing the visual and verbal information. Each print had different versions within the same edition so that the unpredictability that the title suggests manifested itself in the production process. Heinecken had a desire to replicate the speed and impact from where the material was sourced, hence released the work in proximity with the dates of the original material. The juxtaposed images were intended to highlight the oversaturation of mass media of the time, creating a critical engagement with photographic representation.

Alexandra Leykauf’s work focuses on the different levels at which an image exists. Her work shifts between representation of surface or space as physical substance or abstract suggestion. Each sculpture in this exhibition is created from photographs depicting glass cabinets in different museums. The glass vitrine becomes the lens through which space is represented but also disrupted by the sense of interior and exterior. As a viewer you are absent through the fact that you are never visible through the object or in the reflection. The objects on display are commodities of the past, objects of historical value, which may have lost their meaning to the contemporary viewer. The glass cabinets do not imitate directly the original but are clearly stand-ins for the object. By using this simple means, the constructions are distanced from the notion of the precious that is inherent to any display in a museum.

Dóra Maurer is an important figure in the Hungarian avant-garde art scene. Her artistic process of displacement and change manifests itself in different disciplines, one strand of which is photographic. There are constructive, concrete art methods at work in the way changes are created through translations, progressions and variations. Movement is to be understood not as mechanical but as movement for the eye, movement as the process of perception. Laszlo Beke describes her oeuvre as ‘Objective Tenderness’. Her use of a camera allowed the course of movements to be shown, ways of action and body talk to be made visible in sequences. In the series ‘Blind Touching of Objects’ Maurer wrapped the photo paper around everyday objects from her studio. The imprint of the object becomes the form of the photogram. In her series ‘Sluices’ she moves from a photograph, to a photogram, to a dustgram – all using a template abstract structure to record their different physical traces of movement through it.

Lisa Oppenheim combs through archives and collections in search of examples of historical photography and its techniques, to be translated in her own photographs and film projections. For her, it is not just about the various moments at which reality was registered but also about how they guide our perception and experience of it. Her ‘Heliograms’ are made from an image of the sun from July 8th, 1876. This archival negative is exposed at different times of the day to sunlight, starting at dawn and continuing until dusk. There are times of the day when the artist cannot make an exposure, which appear as blank spaces on the wall, making physical a fractured temporal experience. Oppenheim makes a connection between the object represented and the physical way that light is the material that creates the photograph.

Erin Shirreff’s film ‘Ansel Adams, RCA building, circa 1940’, takes as its source imagery the classic American photographer’s architectural portrait of Rockefeller Plaza. Made by re-photographing the same image hundreds of times to counterfeit changing light and climate conditions, it appears to be a time-lapse film of the building itself. She re-imagines a physical and temporal relationship to the autonomous iconic original photograph of building as monument. This shift between the sculptural and photographic is also emphasized in her ‘Four Sides’ series, which similarly destabilizes the viewers sense of perception by taking two photographs of a minimal sculptural form, bisecting the flattened image and reconnecting it in four different permutations that appear to recreate four different sculptures. Shirreff investigates the spaces and intervals between these translated forms and images to animate the imaginative space of what we see and don't see.