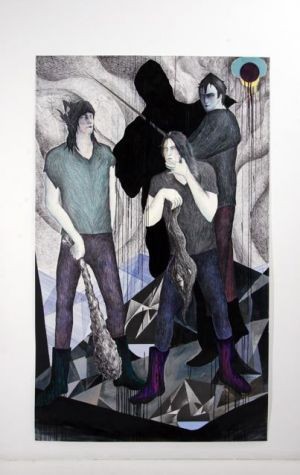 THE BREEDER is pleased to announce the first upcoming solo exhibition of Alexandros Tzannis titled, Doomed by Fantasy. Labour intensive, Alexandros Tzannis uses ballpoint ink, pencil, charcoal, spray paint and oil in these large-scale drawings. Nadjia Argyropoulou writes the following about Alexandros Tzannis.
“One of Alexandros Tzannis’ new works is titled ‘I fight the nightmare, the nightmare I became’. It is the third part of a triptych, which connects this body of work to the last, as we saw it at the shows, ‘Whatever remains is future’, ‘The Contemporary Greek Scene’ and ‘True Romance’.
The general title of Alexandros Tzannis’ first solo exhibition, Doomed by Fantasy, seems to position itself in a field of neo-goth or post-heroic reference and sensitivity. His paintings are formed in a space deliberately ambiguous - between smooth drawings and the process of painting, and also giving the impression of a reversed collage (parts are eliminated rather than added). In this way, the quality of Tzannis’ work seems to have the fluidity of a voyage. A voyage that ranges from the stormy symbolism of Arnold Böcklin to the landscape-painting romanticism of Caspar Friedrich, from the perception of shadow of Rembrandt, the ecstatic handling of figures of the Pre-Raphaelites, the sharpness of Dürer to the dreary neopsychedelia of the US west coast art scene. Without distinct mythological references, the sexually illustrative vocabulary, the edginess of heavy metal, the fragmentation or the violent distortions, which seem to be dominating tendencies today (Kleckner, Greene, Bareikis, etc), the result is absolutely personal.
Monumental yet historically undetermined, threatening but not grotesque, courteous without symbols of origin or traces of agency, and genderless almost in the Jeanne D’ Arc or Luke Skywalker sense, the figures of Tzannis’ tableaux reflect on (if not tremble on) the fine line which divides or even unites knowledge from madness, form from abstraction, the imaginary from the real, the bright from the dark”.
Recent Group Exhibitions include:
Stranger than Paradise, Galerie Charlotte Moser, Geneve, curated by Max Henry
Topoi, works from the collection of The Macedonian Museum of Contemporary Art, New Benaki Museum, Athens, curated by Dennis Zacharopoulos
True Romance, The Breeder, Athens
I sigxroni Elliniki Skini, Helexpo Garage, Athens, curated by Nadjia Argyropoulou
Gegen den Strich, Künstlerhaus Bethanien, Berlin, curated by Christoph Tannert and Valeria Schulte-Fischedick.
www.thebreedersystem.com