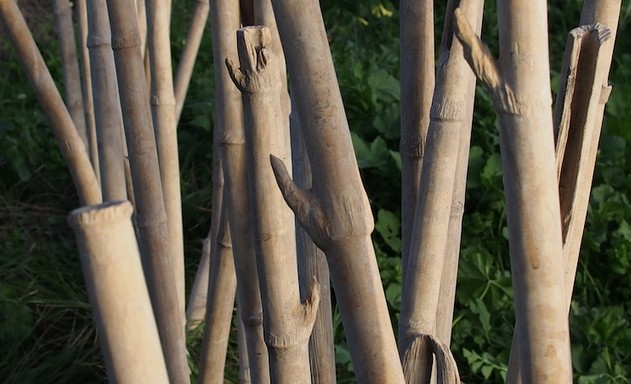 
Andreas Lolis’ (b. 1970) practice is imbued with the awareness of the cultural weight of a large inherited sculptural tradition but also the need of the artist to confront this tradition and deal with different sides of the current sociopolitical reality amidst the crisis.

The exhibition consists of two installations that are developed in parallel and in contrast to one another, around the conceptual dipole of surplus-deficit. The concept of liquidity incurs conceptually throughout the e xhibition. Marble remains Lolis’ favourite medium, which for the first time here is combined with clay, to support the increased narrative needs of this new body of work.

At the gallery’s ground floor, a thin piece of marble embedded onto the actual wall of the gallery is carved to resemble a weathered wall from extensive humidity, next to it sits an old fashion ladder made of brown marble, that resembles wood. The impression formed is that some kind of leakage or increased humidity has caused the damage on the wall and that human intervention is imminent or pending to restore it.

At the basement, covering the floor, dried and cracked clay resembles a dried water environment –river, lake, marsh...– where the only surviving element is a rhythmic and interrupted line of canes. These canes, carved meticulously out of marble, do not bloom, they move in limbo, deprived from the indispensable for their survival element, water. These organic forms, allegories of life in precarity, are simultaneously natural obstacles, fences. The installation interacts and collaborates with the architectural elements of the space, the existing ones as well as the drain of the former industrial space of the gallery.

A common denominator in both installations is the liquid element, water, either through its abundant presence or through its absence. Water stands for the natural resources and the common goods, indispensable elements of life, that are however deprived from a big percentage of the world, threatening its survival. Through the poetic images that the artist creates, images of decline, decay and desertification, emerges his critical disposition against phenomena of late capitalism, like the irrational use and allocation of resources, accumulation, the different kinds of blockages and entrenchments, poverty, climate change...

Andreas Lolis’ previous body of work is characterized by his love for marble –a noble and characteristically Hellenic material– and his thematic dedication in perishable objects that are used to pack and transport consumer goods: crushed cardboard boxes, Styrofoam pieces and wooden pallets, scattered on the exhibition space as we would encounter them in a warehouse or at the side of the street. These marble dummies at first give the impression of found objects; yet when we examine them closely –or even touch them– we discover that they are trompe l’oeil sculptures, carved in marble to render with accuracy shapes, colors and textures. The pleasure evoked by the realistic details of the works is undeniable. But impressing the viewer, surprising him, disorienting his cognitive function is not a goal in itself. Andreas Lolis is using his classical training and material to elevate elements of a low and worthless reality to the realm of the monumental and also to comment upon an inglorious aspect of the contemporary world: the characteristic to our consumer societies production and disposal of waste.

Already in these previous works we can trace the disposition for sociopolitical critique, which was especially sharpened with the more recent installation Permanent Residence (currently on view at the Lyon Biennial) inspired from the impromptu made shelters of homeless people on the streets. Cardboard boxes, pieces of Styrofoam and pallets were presented as the litter of one person that transforms into possessions of another person and composed an affectionate installation-tribute to the anonymous impromptu architecture of the urban margins and its invisible creators.

In this exhibition, Andreas Lolis for the first time is dealing with organic and random forms and not strictly with imitations of man made objects. The enrichment of his vocabulary with new elements serves his ever growing need to stand critically against today’s sociopolitical reality and discuss different aspects of the crisis.

Dionyssia Stephanopoulou
November 2015
Andreas Lolis (1970) has collaborated for projects and exhibitions with the distinguished curators including: by Ralph Rugoff (Director of Hayward Gallery, London), Nicolas Bourriaud (Director of the École Nationale Supérieure des Beaux-Arts, Paris), Shamim Momin (Director and Curator at LAND, Los Angeles, co-curator of the 2004 and 2008 Whitney Biennale), Claire Lilly (director of Yorkshire Sculpture Park), Tom Eccles (Executive Director of the Center for Curatorial Studies at Bard College), Xenia Kalpaktsoglou (curator and co-founder of the Athens Biennial), Nadja Argyropoulou (curator, collaborator of DESTE Foundation). Currenty his work is on view at the 13th Lyon Biennial “La Vie Moderne” that is curated by by Ralph Rugoff.
www.thebreedersystem.com