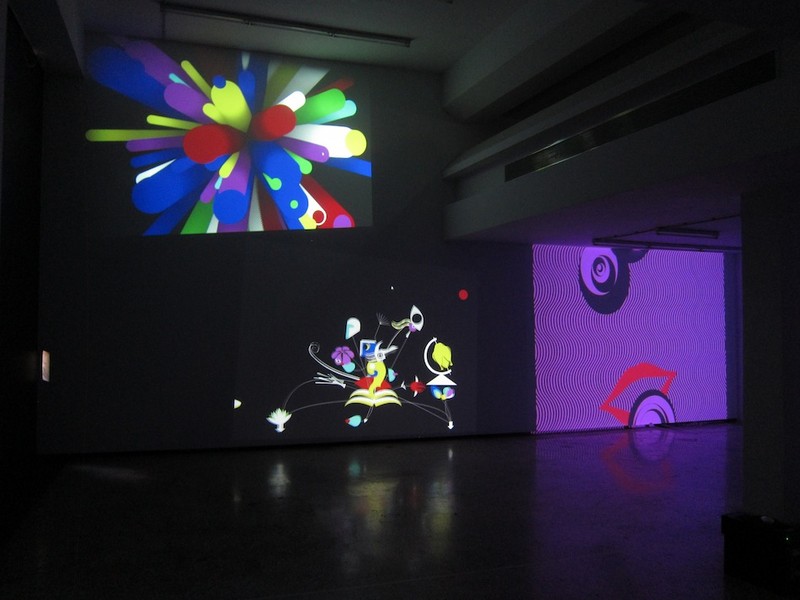 Angelo Plessas’ works strongly reflect and master the language of the internet since the late 90s. Using the internet as a vehicle for exploration of subjectivity, iconography, abstraction and as a powered tool for experience, he creates mechanical landscape generators, where his online environments are visionary propositions that have been begotten in browser windows. Plessas is part of a generation of artists that grew up with Google and maintain a studio in their laptop, so pasting traditional media such as drawing onto a website is a natural act. By turning the title of the work into a registered web-domain, he makes animated drawings that are at once electronic and unique, the image reproducible on millions of computers but existing only on its particular location of the singular internet address. Often focusing on the themes of authority and identity, Plessas’ web drawings become characters and portraits, alternating between funny and poignant, they reflect the abstract emotions often experienced in electronic communication and everyday misunderstandings. Works such as “MeLookingAtYou.com” (2005) are indeed portraits that owe as much to text emoticons as to Paul Klee’s naïve and complex emotional spirituality.

Angelo Plessas (Greek-Italian) is based in Athens. He is the founder and curator of The Eternal Internet Brotherhood, a collaborative annual residency/summit/project realized in different parts of the world (Anafi, 2012, Xilitla, 2013, Dead Sea, 2014). Plessas is shortlisted for DESTE Prize 2015, an exhibition of the 6 shortlisted artists will be on view at the Museum of Cycladic Art in Athens from May 27th -September 30th 2015. Plessas has presented his work in a number of exhibitions which include: “A Cab” curated by Valentinas Klimasauskas, Kunsthalle Athena, (2014), “Food” curated by Adelina von Furstenberg in MuCEM, Marceille (2014), “Scenes d’Europe” curated by Florence Derieux and Antoine Marchand, Frac Champagne-Ardenne (2013), Frieze Projects curated by Nicola Lees, Frieze London (2013), “Digitart at Studio 13/16” curated by Abdel Bounane, in Centre Pompidou, Paris (2013), “This must be the place”, in Kunsthalle Athena (2013), “Rhizome/Fact 5 videos for the 2012 Liverpool Biennial”, curated by Joanne McNeil and Omar Kholeif (2012), ” Word of Mouth” at “Monodrome”, 3rd Athens Biennale, (2011), the 3rd Thessaloniki Biennale ,”A Rock and a hard place”, curated by Paolo Colombo, Mahita Ebu, and Marina Fokidis (2011), “The Angelo Foundation School of Music” curated by Stamatis Shizakis at the National Museum of Contemporary Art, Athens (2011), “Visual Dialogues”, Onassis Cultural Centre (2010), “Spendid Isolation”, 3rd Athens Biennale, curated by Cay Sophie Rabinowitz (2009), “Expanded Ecologies” curated by Daphne Vitali in National Museum of Contemporary Art, Athens (2009), “In Present Tense”, National Museum of Contemporary Art, Athens (2007), “Her(his)story” curated by Marina Fokidis in the Museum of Cycladic Art, Athens.