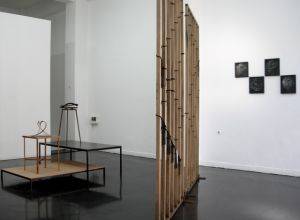 THE BREEDER is pleased to announce the first solo show of Athanasios Argianas in Athens.
At THE BREEDER, Athanasios Argianas will present an installation that consists of two parts, the first part featuring Braid series 1, Il Pleut and Lyrical Machines. The Braid Series are gouaches of braid designs based on found imagery, depicting cyclical designs and arranged in a specific pattern. Il pleut functions as two dividing screens between the other works in the room and resembles a display structure / bookshelf. It is based on a Calligramme of the same title by Guillaume Apolinaire, where the direction of the words follows the course of raindrops. Copies of the poem, which is written in vertical verses, are cut in strips and hang in the frames of the sculpture. The Lyrical Machines are sculptures translating the structure of a Canon* written by Athanasios Argianas.
The second part of the installation presented at the basement, is entitled Music For Four Imagined Theremins and is centered on a short quartet for whistling. The Theremin was one of the first electronic musical instruments invented in the 1930s and carried utopian ideals about the future of music. It is controlled without physical contact, by the proximity of the performer’s hands to two sensors. The installation comprises of a sound piece audible on a turntable and a series of models relating to the sound piece that form an assemblage on a custom made display structure.
www.thebreedersystem.com