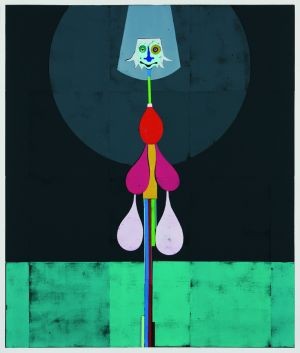 The Breeder is pleased to announce the second solo show in Athens of Romanian artists Gert & Uwe Tobias.

Twin brothers and artistic collaborators Gert & Uwe were born in Brasov –Romania, a region renown for its rich history and the scenic beauty of the Carpathian landscape. In 1985 they relocated with their family in Cologne, Germany where they still live and work.

The Tobias brothers are highly acclaimed for their large size coloured woodcuts and have been praised as revivers and innovators of this lost arts and crafts printing technique. The woodcut printing method had been left to oblivion decades ago in the artistic milieu and has been invigorated to its highest grandeur by the artists. Their work has been built upon a modus operandi which origins date back to the 1st Century and which regained importance in Europe in the 15th c with the work of German Albrecht Dürer, while later was linked with the Expressionists.

Gert & Uwe Tobias oeuvre is to its most extent biographical and highly influenced by Hungaro-Romanian folk art, mythologies, fairytales, Socialist Architecture, Cubism, Expressionism, Dadaism, contemporary graphic design and advertisement. The ornamented features of their woodcuts can also be found in works by artists of “High Modernism” (in Gauguin or Matisse, for example) and in more recent art (Mark Tansey, Kara Walker, Peter Kogler etc). Gert & Uwe Tobias bring together in their work a number of different practices like ceramics, collages, drawings, writing, woodcuts and installation. In their diverse production of images one comes across surreal, dark and burlesque type of figures which are recurrent in their work; and which are evocative of their past childhood. Circus like figures are composed into abstract shapes and blended with words that give them a symbolic character.

This year they have presented their work in solo exhibitions at the Franz Gertsch Museum in Switzerland, in Kunsthalle Wien Projectspace in Vienna, in Kestner Gesellschaft, Hannover and have forthcoming shows in La Conservera in Murcia and in Collezione Maramotti in Regio Emilia in Italy. Other solo shows include Kunstmuseum Bonn (2008), Projects 86 Museum of Modern Art, New York (2007), Bergen Kunsthalle (2007), Brukenthal Museum (2007), Kunstverein Heilbronn (2007), UCLA Hammer Museum of Art in Los Angeles (2006), Bonner Kunstverein (2005).
www.thebreedersystem.com