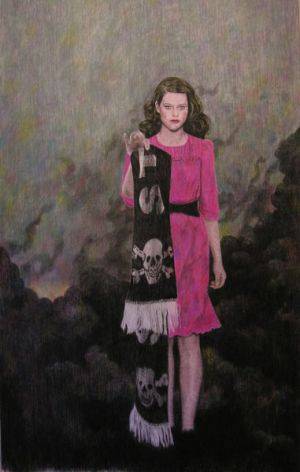 THE BREEDER is pleased to announce the second show of Dutch artist Iris van Dongen in Athens.
Iris van Dongen has become reknown in the last few years for her portraits of young women that stand between historical painting and contemporary iconography. These large format drawings (often mixing pencil, pastel, watercolour and charcoal) exude a melancholy air and combine decorative elements of Gustav Klimt and 19th century Pre-Raphaelite paintings, with symbols of a contemporary subculture, such as a scarf with a skull on it or a tattoo. Loaded with symbolism, these works draw on the tradition of the vanitas still life paintings that flourished during the 17th century in Holland, in which sumptuous arrangements of fruit and flowers were accompanied by symbolic reminders of life's impermanence, such as a skull, an hourglass or a candle burning down.
In her second show at THE BREEDER, Iris van Dongen collaborates with artists Josepha de Jong and Ellemieke Schoenmaker to form a group with the name Kimberly Clark.
In the current exhibition titled Hooley*, Iris van Dongen presents her new drawings as part of a larger set of works by Kimberly Clark. The sculptures of an elegantly dressed, seemingly wealthy woman that begs with her hand stretched out and a woman dancing on a trash pile of karton boxes and plastic bottles in a posture reminiscent of the Dutch dance subculture 'Gabber', together with a slide show of Kimberly Clark photographs accompanied by music, create an overall and coherent installation.
Iris van Dongen was born in Tilburg (Netherlands) in 1975, Josepha de Jong in Oosterwalde (Netherlands) in 1977, and Ellemieke Schoenmaker in Balkburg (Netherlands) in 1969. They live and work in Rotterdam.
*Hooliganism is slang for unruly and destructive behaviour that according to a theory derived from the Irish word, Hooley, which means a wild, spirited party.
www.thebreedersystem.com