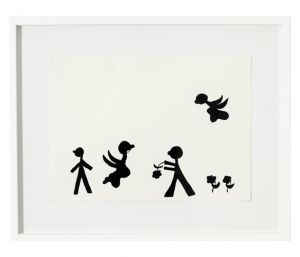 The Breeder is delighted to present the American artist Kalup Linzy (Florida 1977) in his first solo exhibition in Athens. Linzy’s project for The Breeder consists of drawings and a new video, Conversations wit de Churen VII: Lil’ Myron’s Trade.
Kalup Linzy mediates the politics of gender and race through videos, which he writes, designs and performs. Keenly aware of the role of the media in shaping societal perceptions, behaviors and fashions, Linzy taps the television genres of soap opera and situation comedy to create turgid mini-dramas that showcase his politicized portrayals. His personae, most of which he plays himself, are conflations of his upbringing in the African-American culture of the Southern United States (family and church ties, dialect, humor, music), as well as his experiences in the contemporary art world.
Along with his African-American perspective, queerness is the most obvious aspect of Linzy’s work. In contrast to the female impersonation and drag performance that Greek audiences are familiar with, such as that of Lakis Lazopoulos, which is geared towards entertaining straight audiences by satirizing the types they know, Linzy uses parody to undermine the established authority of gender and sexuality and to question naturalized systems. Wearing rudimentary drag, often consisting only of a blatantly ill-fitting wig framing his unshaven face, he seamlessly transitions from male to female, or else dubs his own Southern-Black voice over those of male and female performers of other races. In both cases he succeeds in upending the values and norms of whiteness and heterosexuality.
With his drawings, Linzy takes his place as a successor to the “Harlem Renaissance” movement of the 1920s-30s, which was a flowering of African-American social thought expressed through the visual arts and music. His stylized, graphic black-and-white song-and-dance images are direct heirs to the jitterbug, R&B, jazz, ragtime and music hall themes used by artists like Archibald John Motley Jr. (1891-1981) and William H. Johnson (1901-1970). Linzy’s historicized imagery also follows the (grimmer) tradition of the vintage techniques and folk tales and the racist “darkie” popular references appropriated by younger African-American artists Kara Walker (1969) and Michael Ray Charles (1967), respectively.
Equally at home on YouTube (his website includes a MySpace link) as in a gallery setting, the content and low-tech look of Linzy’s videos do away with any vestigial discrepancies between high art and pop culture. That most of their action takes place via telephone conversations is simply another reflection of contemporary life, which seems to be lived more and more vicariously and distanced, instead of in face-to-face encounters.
Beyond their obvious campy hyperbole, Linzy’s scenarios balance parody with a tender yet pointed commentary on the vicissitudes of life, love and career in today’s world.