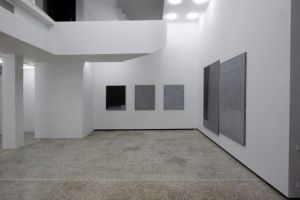 The Breeder is pleased to announce the second solo exhibition in Athens of German born, London based artist Markus Amm, that consists of new paintings, sculptures and works on paper. With its roots in historically established non-representational movements such as Constructivism, Bauhaus, De Stijl, Abstract Expressionism and Deconstuctivism, Markus Amm's own unique style has been built upon the rock solid techniques of the twentieth century's most groundbreaking conceptual artists.

Like silent x-rays and inverted silhouettes, the array of black and white geometric abstractions in Amm's canvas works appear as nearly cubistic imprints of shadow shapes, broken planes and the torn edges of elegantly textured surfaces. They seem to float and mingle with in their monochrome frames, seemingly unpinned from their material backing. Assembled and re-assembled each upon an other, these subtly painted layers, traced frames and outlines are composed and combined like a series of time lapse snapshots or stack of composited blue prints; each layer a solo antecedent yet intrinsic part of the work’s totality. As such, Amm’s visually and conceptually complex pieces speak a testament to their own construction process. It is a silent visual conversation between piece and viewer that allows one privileged access to the workings of the artist’s interior process, creating depth through a series of interlocking compositions. Though they maintain a remarkable collage like appearance, the canvases are indeed painted works employing oil, varnish, lacquer and a variety of surface treatments to produce delicate edge and planar effects. Crushed, fragmented, stained or sliced the variety of textures and grains included in each work are often highlighted by a complementary curve, stripe or color tint that punctuates their mute demeanor to imbue the piece with a sense of intimacy, immediacy and mood.
In close proximity to his canvas works, Amm's wall and sculptural pieces project his deftly constructed compositions from the surface of the canvas into the multi dimensional space of architecture. Through the careful application of surface treatments on walls, calculative placement of thin, angular, metal sculptures and the addition of signature painted fragments, Amm constructs a visual picture plane from the tangible gallery space. Framed and accented by their own structural elements, these painting-installations unfold and re-structure themselves as the viewer’s perspective crosses the space. This transformation of such architectural spaces into a visual compositions, by the near negation of its inherent three dimensionality, is negotiated through the application of long monochrome color fields, which merge walls into planes and corners, fixtures into collage elements, and the meeting point of floors and ceilings into the ripped edges, cut and seam design elements central to his two dimensional canvas compositions. Amm's masterful presentation of such interrelationships of space and canvas, fragment and whole, present and process, is an exercise in abstraction that appears to have opened the way to new spheres of artistic production, merging format, structure and style.

Markus Amm was born in Germany in 1969 and he now lives and works in London. He has been included in numerous museum group shows over the last years like International Contemporary Art from the Collection of Burt Aaron, Museum of Contemporary Art Detroit, Detroit, in the show Neuer Konstruktivismus, in Kunstverein Bielefeld, in the exhibition Language of Vision, Middlesbrough Institute of Modern Art, UK. Other shows that he recently was included are Blind Date Passau, curated by Araine Grigoteit and Jessica Morgan, in the Museum Moderner Kunst Stiftung Worlen, in Passau, Germany, in the show "DERECONSTRUCTION" in Barbara Gladstone gallery in NY that was curated by Matthew Higgs, in Blind Date -Sammlung Deutsche Bank-Galerie Kunstforum, Seligenstadt and in a duo show with Yesim Akdeniz in West London Projects that was curated by Christiane Schneider. Last year he was also included in the Triumph of Painting 4: Germania, in the Saatchi Gallery in London.
www.thebreedersystem.com