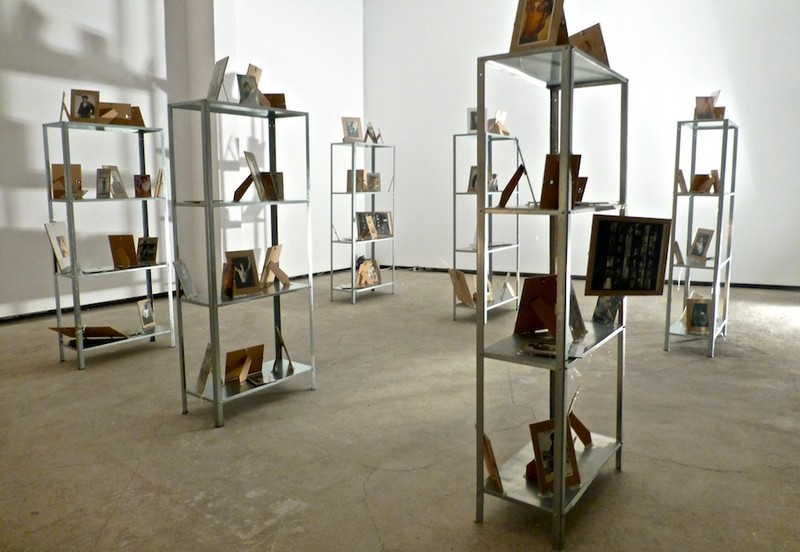 The Breeder is pleased to present Paola Revenioti‘s first solo exhibition. Her photοgraphic and video archive will be presented in an installation designed and curated by artist and architect Andreas Angelidakis.
Paola’s photographic archive includes portraits that are a cross between Walter Pfeiffer and Larry Clark: boys looking dreamy, sleepy, rough. The resulting images range from romantic to pornographic. They are organized on a series of metal shelves, as a haphazard accumulation of framed family photos. Some photos stand properly on the shelves, others have fallen flat, glued together they represent a family of fictional relations. Paolas’ lovers occupy the same space as interview subjects from her magazine, friends having fun on the street or scenes from LGBT protests in downtown Athens. Moving around the room, some lights come on as others are switched off, casting shadows on the walls, casting light on other unseen parts. The archive walks a fine line between a personal record and a public documentary of the city of Athens and its evolution over the 30 years.
The videos that are screened on the ground floor of the gallery were made particularly for the exhibition. They are a remix from Paola’s photos and uploads on youtube and combine incidences from night encounters, little chats with her transexual friends and images of the Athenian underworld.
A trailblazing pioneer of gay and trans rights, Paola Revenioti is an activist and a prostitute. Recently she is occupied with a series of youtube documentaries that she films with George Liakos “The Paola Project” (www.youtube.com/thepaolaproject). The sum of her activities is what we understand today as the practice of a contemporary artist. But in the early 80′s, when she began publishing her groundbreaking trans-anarchist fanzine “Kraximo”: interviewing Felix Guattari next to the nightly accounts of a street hustler, that was just unheard of. The maga-paper, as she used to call her “revolutionary homosexual expression”-zine, was funded by her own prostitution as well as by random donations from Greek intelligentsia. The name of the publication is controversial on its own, Kraximo is the Greek term for gay bashing. On the cover of the pink newsprint (think BUTT, only 30 years prior) she proclaimed that “every occupation geared towards profit is prostitution” and signing off as “Publisher, the transvestite prostitute Paola”. Working the avenues at night, she also financed the first gay pride events in the Athens of the early 90’s.
www.thebreedersystem.com