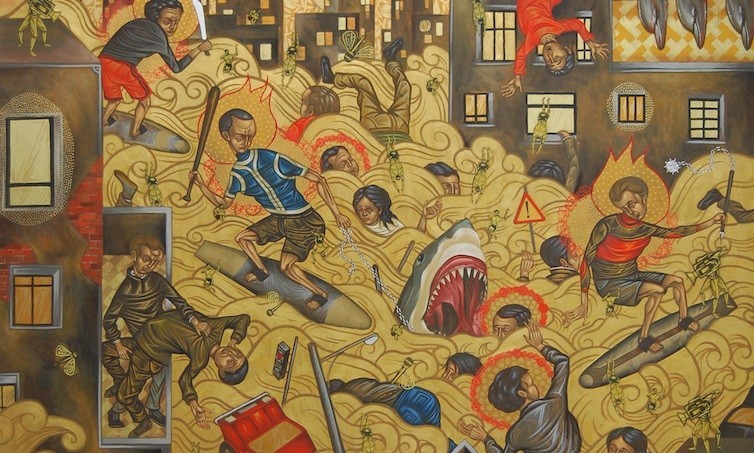 The Breeder presents the group exhibition “The Breeder Series” with limited edition works by Andreas Angelidakis, Stelios Faitakis, HOPE, Antonis Katsouris, Angelos Papadimitriou, Jannis Varelas / Alexandros Tzannis. It is the second time that The Breeder is hosting a show of editioned works, the first being “Oblong Series” with works by Jannis Varelas last December.
In this new series of multiples, Andreas Angelidakis toys with preconceived ideas of consumerism, copyright and the desirable object. Mixing copyright-free 18th century engravings of ancient Rome with ruins from the internet and computer generated virtual rocks, Angelidakis packages prints on canvas and cardboard as potential products of desire. They speak about our urge to consume even the most ephemeral idea, and our constant search for something to want.
The show includes and the first limited edition work by Stelios Faitakis, a hand made silkscreen, which is an edition of 50 (each work is numbered and signed by the artist). The title of the work is “Flood” and it depicts in the most dramatic way a flooded urban landscape in which surfers with halos around their heads are encircled by sharks amidst skyscrapers. It is a great example of Stelios Faitakis practice, which stands out for its unique visual language, its references in Byzantine iconography, renaissance painting, Mexican muralism and asian arts.
The works presented by street artist HOPE are digital prints (editions of 20) where his black and white totemic compositions are juxtaposed with bold monochromatic backgrounds. Elements from ancient sculptures are piled up with images from b-movies and vintage toys resulting in the unexpected imagery that characterises HOPE’s works.
themoonseries is the first series of images of a sporadic project in progress which is curated and produced by Antonis Katsouris. With references in folklor, in innocence and in the «highness» of the landscape the images of themoonseries are found in vintage books that bear as titles the names of countries of North Europe. Painlessly anachronistic and lightly romantic, the aesthetics of these images (neglected by the history of Photography) has infuenced the work of contemporary photographers – such as Torbjorn Rodland, Collier Schorr ot Wolfgang Tillmans – and through themoonseries is being rediscovered and re-used marked (or maybe «kissed»?) by the monochromatic motives of the moon... that in their abstract and eliptic way transform these photographs in a series of «optical love affairs». The ten images of themoonseries prefer to remain atopic and «anonymous» just like the narrative of a story or a fairytale, which is absurbly interrupted... like a meteor. And such, with no center, no control, sunk in the hypnotic aesthetic of silence/pause, the images of themoonseries could be the paper version of a posts in a tumblr blog of a post-ironic era. Of now. The work of Antonis Katsouris is a 10 page magazine in 10 limited edition copies which is available per page or per issue.
Angelos Papadimitriou presents a series of unique handmade porcelain vases (1996), each of which depicts the artist’s passions (theater, books, happiness, lover, death, flowers). Papadimitriou’s porcelain ornaments are often assosiated with kitsch aesthetics and convey in a delicate way the artist’s memories and nostalgia. One of the most prominent Greek artists of his generation, Papadimitriou stands out for his multi-faceted unconventional career.
Jannis Varelas and Alexandros Tzannis have created their own version of a monthly calendar with collage and painting interventions on pages of original vintage calendars, paying tribute to the sexy combo of girls and cars. They are referencing the eroticism of an auto repair shop of the past. They will present one print for every month with each of them being an edition of 3. Their presentation will be complemented by a real car that will be installed in the gallery, referencing the former use of the space which was a mechanic shop in the 80s.
www.thebreedersystem.com