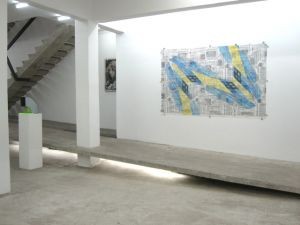 The Breeder presents the group exhibition “The Newspaper Show” with works by young international artists whose central core is the newspaper. Contrary to the digital revolution and the economic recession that threatens the printed media with extinction, the artists with their own extraordinary ways assist for the perpetuation of the medium.

Appropriations of printed matter, most commonly newspapers first appeared in the Synthetic Cubism of Picasso, Braque and Juan Gris, in 1912. A century ago it was a radical concept: ephemera intended for disposal incorporated into fine artwork that was expected to have timeless value. Fifty years later Pop and Arte Povera artists took up the enterprise, with different objectives but undiminished impact. And although the conceptual premises behind the use of found printed matter may have changed over the decades, its appeal to artists perseveres.

The artists that participate in the show use the newspaper either as a raw material or as a conceptual canvas for the work that they present.

Socrates Socratous coats the gallery walls with pages of Cypriot newspaper “New Times” from 1960-1974 that he collected from a military outpost in the green line of Nicosia. The Junta and the coup in Cyprus, Vietnam war, the man on the moon, Middle East and Cuba make headlines along with other news that aren’t far from today’s reality. The installation “Page Range” also includes an artistic intervention on the wide distribution Cypriot newspaper “Fileleytheros” (“The Liberal”) which on the day of the opening transforms its front page into an artwork co-signed by the artist and the publisher of the newspaper Nikos Pattichis. Copies of the newspaper will be available at the exhibition but will also circulate as usual at their regular retail outposts. Part of the same work is the current issue of the Athenian free press Lifo which has a work by Socratous at its back cover and will be exhibited-distributed at the gallery from Lifo’s well recognized metal stand. Lucas Lenglet shows us “what the Greeks don’t know” with his collage from press clippings from the Dutch press on the Greek financial crisis. Dimitrios Antonitsis presents his series “Keep Calm and Carry On” which are reproductions from actual photo-romances from the 70s that present a bankrupt Greece managed by Bavarians, a concept that comes back with the IMF today. Elias Kafouros examines the newspaper as a symbol whose components are time and recording through language and image. He is interested in the psychological dimensions of its function, the familiarity of its aesthetics and also the fact that it is an actual archetypical plan of the psychological perception of our relation with time and place in the Western World. Chinese artist Tao Xue takes newspaper and twists it into rope from which he makes sculptures. Thus the print medium is converted into durable construction material. In many ways Tao Xue’s practice reflects the experience of life in today’s China, caught in a struggle between tradition and progress with its contractions, dichotomies, and dizzying social changes. The recurrent element in Gabriel Vormstein’s work is the use of newspaper as the artist’s chosen canvas along with classical female figures, which he draws after Egon Schiele’s models. Paris Koutsikos and b. transfer their personal imaginary worlds from the streets of Athens where we first encountered them onto newspapers. Konstantin Kakanias paints his reknown heroine Mrs Tependris on printed advertisements offering her the lead role that she so much deserves. Dafni Barbageorgopoulou picks a fabric with a newspaper print on which she imprints the traces of a motif of her own. Alexandros Vasmoulakis presents a series of portraits collaged from small colorful pieces of newspapers. Apostolos Georgiou depicts on his acrylic on canvas painting the newspaper as an ally in desperation, since the protagonist has covered his face with it. Sofia Touboura combines in her sculptures newspaper with neon plexiglass and synthetic resin with unexpected results. Margarita Myrogianni presents a photographic diptych of a still life with newspaper used as an object while at Tjorg Douglas Beer’s collages a puppet is surrounded by images of celebrities, actors, pop star, dictators and war criminals that he has cut out of newspapers.
www.thebreedersystem.com