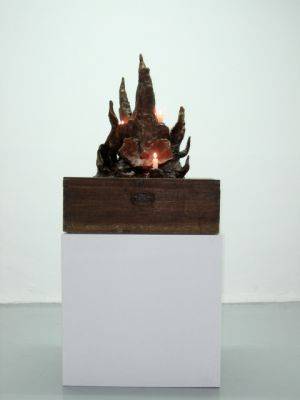 THE BREEDER is pleased to present the first solo show by German artist Uwe Henneken, in Athens.
The characteristic twilight in Uwe Henneken’s paintings, the exaggerated, garish colours next to darker, moody tones and a certain ironic disposition that brings together a melancholic feeling and the grotesque, enhance his oeuvre with an unexpected audacity. There is no attempt to develop any particular painterly style, but with several references to romanticism, symbolism and allusions to primitive forms, he inserts demonic figures, harlequins and clowns in landscapes that represent a ruined Arcadia. The allegorical connotations, often emotionally charged, are informed by the recent history of Europe.
In his present show at THE BREEDER, titled Somewhere in Europe they wait, Uwe Henneken presents several paintings and a bronze sculpture. Utilising found northern European landscapes by unkown, «hobby» artists he inserts a funny caricature snooping over the horizon. He calls this sinister figure that respesents a state of the human in his search for knowledge, Vanguard. The paintings of storming seas, mountains with steep slopes, peaceful rivers, splendid forests and raging waves, together his bronze sculpture titled Das Erwachen (The Awakening), represent Nature as a state of the society where all oppositional forces are bound to be unexpectetly unleashed. The serenity of the pre-painted canvases, depicting ideal landscapes, evoke a sense of familiarity with the anticipation of a threat looming somewhere over the horizon. Time stands still just before or right after a disaster.
According to Anke Kempes, Uwe Henneken reactivates the Romantic notion that overcomes the natural logic of images within conventional figuration: “Experiencing Henneken’s pictures is often like encountering something that is shockingly unsuitable.” A vague apprehension and anxiety, a sense of the uncanny is inserted in every work. The title of the show Somewhere in Europe they wait is based on the philosophical idea of posthistory and culture as a forever-changing field. More specifically, it alludes to Oswald Spengler’s “Decline of the West”, where the European culture, the temporary “world high culture”, is facing its winter. Uwe Henneken’s images bear a pure representational force and obey their inner laws which lie beyond narrative.
Natasha Adamou