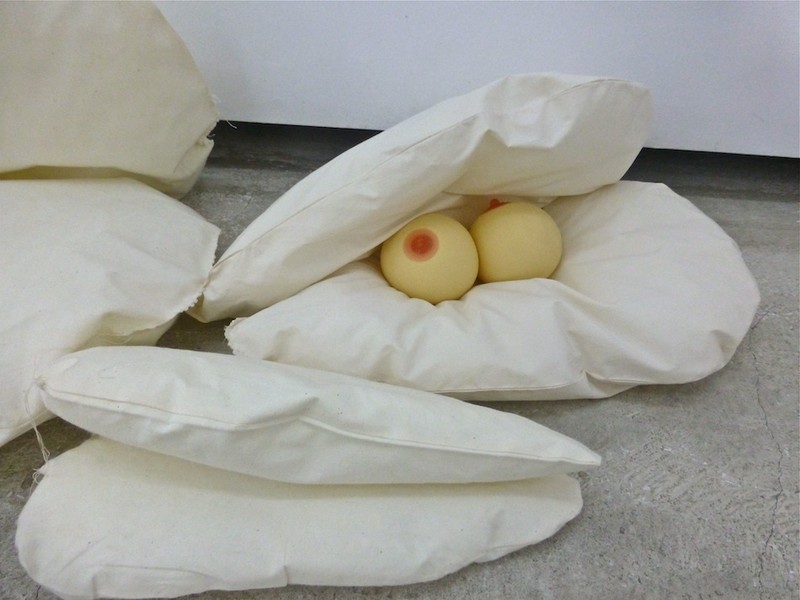 The Breeder is pleased to present a solo exhibition by Vanessa Safavi entitled “La Nuit Liquide”. The show is based on the philosophic concept of the sea as a metaphor for the human mind, as encountered on surrealist references but also on popular myths. The term “La Nuit Liquide” is inspired by Julie Michel Leiris’ (1901-1990) poetic metaphysical writings; “The Unconscious and the Sea”.
Safavi combines multi-layered cultural and art historical references in the form of objects, materials and pictures transporting them from the resources of her own multicultural background, her travels and her ethnological research. Nature and science versus culture or philosophy, her work often borrows diverse shapes.
Different references to important women artists like Carol Rama, Louise Bourgeois, Lynda Benglis and Alina Szapocznikow can also be traced in the works.
“Intérieures” are a series of floor-based sculptures made of silicone sheets that revolve around landscapes of shells, sea creatures and sand, merging the phenomenological material with the inner world of the imagination. As suggested by the title, Intérieures are metaphors for the inner world both physical and mental. The layers of soft, creamy silicon evoke the depths of the sea but also the female body. The sculptures resemble objects of desire that try to articulate their version of interiority.
The series “Polyvalent Metaphorization (Emersion 1,2 and 3)” depicts details and folds of silicon surfaces. The title relates to the Freudian metaphor of the subconcious as the sea, from which thoughts and ideas surface into consiousness. Safavi has developed this series of new works based on the sign of the sea, but also the unknown and the hidden. The silicone transcribes the flesh, the mucus or organs and carries the feeling to a certain possibility of transcendence and awareness. The softness of the material is omnipresent and relates to femininity and the body.
“The Journey” consists of three fabric sculptures shaped as different kinds of shells or mollusks. A plot of mussels and a large-scale clam are overflown with female breasts, while the white fabric recalls the softness of a bed. The artist is making a clear analogy to the depths of the psyche, sexuality and desire.
Vanessa Safavi is of Iranian origin and was born in Laussane, Switzerland in 1980, while she now lives in Berlin. In 2013 she was awarded the Luci d’Artista award and was therefore commissioned to do a public installation in Turin, Italy. In 2014 she will present her work in solo exhibitions at The Breeder Athens and Kunsthalle Sao Paolo in Brazil. Other solo presentations include: Castello di Rivoli, Torino (2013), Kunsthaus Glarus, Kunsthalle Basel, CRAC Alsace RAC, Altkirch, Centre Culturel Suisse, Paris (all 2012). Selected group exhibitions include “AB”, Nomas Foundation, Rome (2013), “Junge Kunst in der Schweiz – 30 Jahre Manor Kunstpreis”, Aargauer Kunsthaus, Aarau (2012), “A Skeleton in the Closet”, Heidelberger Kunstverein, “Livingroom Exotica”, Kunsthaus Glarus, Glarus (2011).
www.thebreedersystem.com