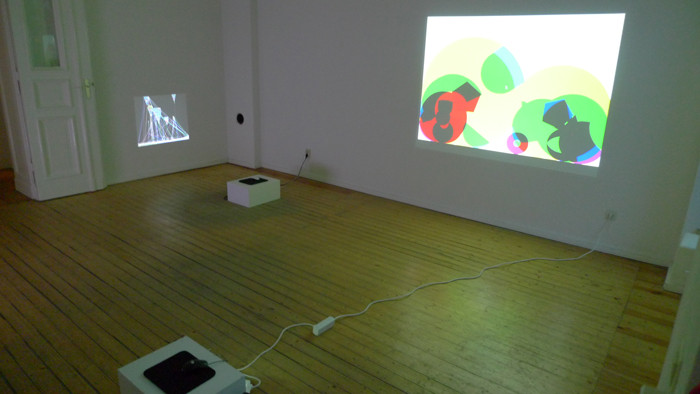 Future Gallery is proud to present One Related Philosophy, the first solo exhibition in Germany of Greek/Italian artist Angelo Plessas.

Angelo's main body of work consists of websites that bring together an animated “object” with a domain name that functions as the title and location of the piece. These web objects often resemble sculptural portraits of imaginary characters, alternating between funny and poignant, strange and romantic. In his work, Plessas fuses iconography of ancient civilizations, surrealist abstractions and modernist references together with the social networking habit of imagined identities. Although immaterial, these pieces have a strong handcrafted quality and a distinct graphic style, always animated and interactive. Sometimes focusing on the theme of identity, these pieces become characters and portraits, while at other times they become experiments of color and form, always conveying abstract emotions to the viewer in contrast to our “reality” driven online situation.

One Related Philosophy is abstracted from the titles of three websites featured in the show. Each work has its own distinct relationship to Internet time. OneMinuteRevolution.com is a website that can only be experienced in its happening for a period of 60 seconds. This almost performative work grasps the fleeting nature of online time. After the work has run its course it is no longer visible, nothing more than a black background remains. ObjectRelatedTheory.com provides an interactive environment, which the viewer is invited to mingle with. The every growing forms continue to accumulate in size until they are struck by the cursor, at which point they sever into smaller pieces of themselves which continue to grow at the same rate as their former parts. ZigZagPhilosophy.com depicts a robust line of color shouting across the screen via mouse movements. With every change in direction the line creases and piles on top of itself infinitely creating a ever forming mountain of colorful zig zags.

Angelo Plessas lives and works in Athens, Greece. His work has been exhibited in various museums and institutions at venues such as: Jeu De Paume, Berkeley Art Museum, Emst Athens, Deste Foundation, Athens Biennale. Most recently he exhibited Angelo Plessas Presents at the Triennale of Milan.
www.futuregallery.org