Tracy + the Plastics and Fawn Krieger 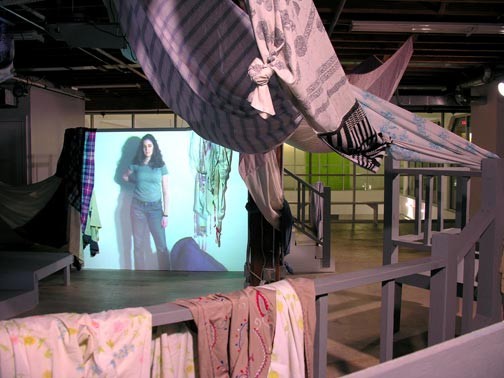 August 9, 2006, Miami- The Moore Space presents ROOM , the second in a series of collaborations between Tracy + the Plastics and Fawn Krieger. Wynne Greenwood, of the low-fi art punk band Tracy + the Plastics, collaborates with sculptor Fawn Krieger to create a new performance and installation. This is a project structured by ideas of non-hierarchical building: building out instead of up, connecting the audience and the performance space, and exposing the structure. It imagines a domestic space that is external, aggressive and performative, a space to move in where the relationships between sound and action are explored as they are placed in a social history and in a room. The process of ROOM , and the resulting installation, attempts to interrupt linear narrative and physical space, questioning binary systems, emphasizing process, and raising conversations between the temporary and the permanent.

With Tracy + the Plastics, Greenwood has created a cyborg band in which she assumes the persona of each band member. Tracy is live on vocals and keyboards, with Nikki on bass and Cola on drums appearing as video projections. The band's performance (which continues throughout the installation) is "interrupted" by conversations between Tracy and her counterparts, who each have their own distinctive personalities, creating an engaging dynamic among this trio of alter-egos. Tracy + the Plastics hangs out in a shared space with guests, as they explore notions of identity and communication, and ask where the present state of radical feminism is.

Originally from Washington State, Tracy + the Plastics spins fractured multi-media experiments addressing the politics of identity and sexuality. It comes out of the do-it-yourself grunge aesthetic that emerged in the 1990s from the music scene in Seattle, reclaiming and transforming that mostly male phenomena into a feminist punk aesthetic.

Wynne Greenwood (b. 1977) lives and works in Washington State and Brooklyn, NY. Greenwood received her M.F.A. in 2004 from The Milton Avery Graduate School of the Arts at Bard College. She is a lesbian feminist video artist who makes live performances, music recordings, installations and collaborations. After studying video production and art history at Rutgers University, New Jersey, in the late 90's, Greenwood moved back to her home state of Washington and began performing the punk band Tracy + the Plastics in 2001. She toured the project extensively and in 2004 Tracy + the Plastics was invited to perform as part of the Whitney Biennial. Greenwood also makes New Report, a performance video project with artist K8 Hardy. Selected performances and exhibitions include Reena Spaulings Fine Art, NYC (New Report, 2005), Whitney Biennial (2004), The Kitchen, NYC (ROOM, 2005), The Moore Space, Miami, FL (ROOM, 2006), Los Angeles Projects, LA (2006), Frye Art Museum, Seattle (2005-2006), d.i.y. art spaces and punk rock nightclubs (2001-present).

Greenwood and Krieger met while both at the Milton Avery Graduate School for the Arts at Bard College. Sharing interests in non-hiearchichal structures of sound, space and time, domestic revolutions, DIY utopias, and feminism, they began their collaboration in January of 2005 with their first ROOM commission at the Kitchen in New York City.

From September 9 through November 1, 2006, an immersive video-installation made of wood, paint, and fabric, and engaging video-projections will be on view and open to the public free of charge from Wed-sat, 10am-5pm and by appointment.

ROOM , the second in the series, was commissioned by THE MOORE SPACE, Miami and presented in collaboration with THE KITCHEN, New York

The Moore Space is a non-profit arts organization dedicated to multi-disciplinary contemporary art practices. It offers a year-round program including exhibitions, educational programs, internships, artist residencies, lectures, and performances. Since its founding in 2001 by collector Rosa de la Cruz together with Craig Robins, an integral part of its exhibition program has been to invite guest curators to contribute new ideas and new thought to the organization and the Miami arts community at large. This project is generously sponsored by Craig Robins, Rosa de la Cruz and Miami-Dade County Department of Cultural Affairs, the Cultural Affairs Council, The Miami-Dade Mayor and the Board of County Commissioners.