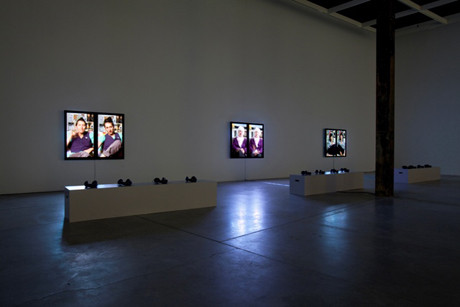 ‘Candice Breitz: Same Same’ features a selection of Breitz’s multi-channel video works as well as a major commission realized with the generous support of Toronto benefactors Partners in Art. This new work, Factum, made in Toronto and focusing on several sets of identical twins, will be the fifth installment of The Power Plant’s Commissioning Program, a major initiative launched in 2006.

Breitz’s work has consistently explored the performance of identity, the tension between what she has referred to as “the scripted life” and one’s own self-fashioning. The epic Legend (A Portrait of Bob Marley) (2005) presents a chorus of thirty Bob Marley fans singing along to his famed Legend album – recorded one by one in Port Antonio, Jamaica, but presented in harmony. Legend exemplifies Breitz’s many collaborations with fan communities, showing how they are shaped by their specific localities. In a similar vein, Becoming (2003) features Breitz’s own studied mimicry of assorted actresses like Cameron Diaz and Reese Witherspoon in Hollywood chick flicks in a kind of celebrity “body-karaoke.” Representing her work with found footage, Four Duets (2000) perversely reduces performances by Annie Lennox, Whitney Houston and other female pop vocalists into infantile, syllabic loops of love-song “I”s and “You”s. The two-room installation Him + Her (2008) is a mesmerizing distillation of Hollywood cinema’s male and female archetypes – as animated by Jack Nicholson and Meryl Streep. Throughout this body of work, Breitz is ultimately concerned with the construction and performance of the self in dialogue with a globalized popular culture. Finally, with Factum (2009), its title referencing Robert Rauschenberg’s 1957 set of near-identical paintings, Breitz finds in identical twins a fascinating case study of how we negotiate the “script” of genetic inheritance and social conditioning. Interviewing several sets of twins – and one set of triplets – in Toronto, each separated from their sibling but asked the same questions, Breitz created a series of dynamically edited video portraits. Factum explores the myriad ways that the twins differentiate and distinguish themselves in a world that values nothing more than the individual. Woven together, their recollections and opinions both collide and harmonize, thereby conveying the simultaneous senses of sameness and difference experienced not only by twins but by ‘singletons’ (as twins call non-twins) too. Factum stages the relationship between the individual and the double, showing how one’s subjective integrity is both threatened and affirmed by the presence of a mirror image that can never be an exact duplicate. It also reflects Toronto as a city of immigrants from across the globe, as all of the participants – or their families – in Factum came from elsewhere.