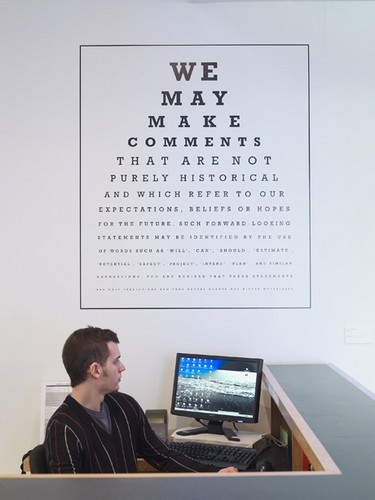 Drawing together works in video, photography, text and performance, ‘Carey Young: Counter Offer’ presents an overview of the artist’s witty explorations of corporate and legal culture. For the past decade Young has investigated art’s links with global commerce, together with legacies of Conceptual art and institutional critique. Immersing herself in the business and legal worlds, Young examines them from the inside out. As such Young makes no claims to an outsider status, but teases out her own, her viewers’ and her host organizations’ complicity with corporate values and processes as a way to discuss ideas of critical distance.

The video I Am a Revolutionary (2001) shows a motivational trainer coaching Young to sound like a convincing ‘radical’. In Product Recall (2007) we see the artist in a psychotherapy session attempting to match advertising slogans about creativity with their respective global brands. Notions of listening, learning and speaking figure in other key works. For the public speaking project Speechcraft (2007 and ongoing) Young collaborates with a Toronto Toastmasters club. Meanwhile the video Everything You’ve Heard is Wrong (1999) shows Young trying to lead a corporate communication skills workshop at Speaker’s Corner. This slippage between global economics and the avant-garde also informs the photographic series ‘Body Techniques’ (2007), for which Young re-enacts legendary performance art works against the epic, new corporate HQ backdrops of Dubai and Sharjah.

Visitor participation is central to several works included. Donorcard (2005 and ongoing) is a limited edition wallet-size card that visitors can take home. The card acquires the status of an artwork once they sign it and remains an artwork until their or the artist’s death: “Art becomes legally bound to life and death.” In The Representative (2005 and ongoing), a ‘portrait by telephone,’ gallery audiences can ask a telephone call centre agent about moments from their life history.

Society’s increasingly litigious nature is Young’s latest focus. In 2008 she worked with a team of lawyers to devise an exhibition based on contracts that concerned viewing, owning and collecting art. Counter Offer (2008), from which the current exhibition title derives, comprises an offer and a counter offer, each with a utopian theme. Creating a legal loop, these offers cancel each other in ‘mid air’: through the act of reading, Counter Offer both erases and ‘withdraws’ itself.

Carey Young (born in 1970, in Lusaka, Zambia, lives in London, UK) has exhibited widely, recently with a solo show at Paula Cooper Gallery, New York (2007) and Thomas Dane Project Space, London (2008). In May 2009 the Museum of Contemporary Art St Louis is organizing a solo show of Young’s telephone call centre works. Young’s work is in public collections of the Tate, Arts Council England and the Centre Pompidou. ‘Counter Offer’ is her first solo show in Canada.