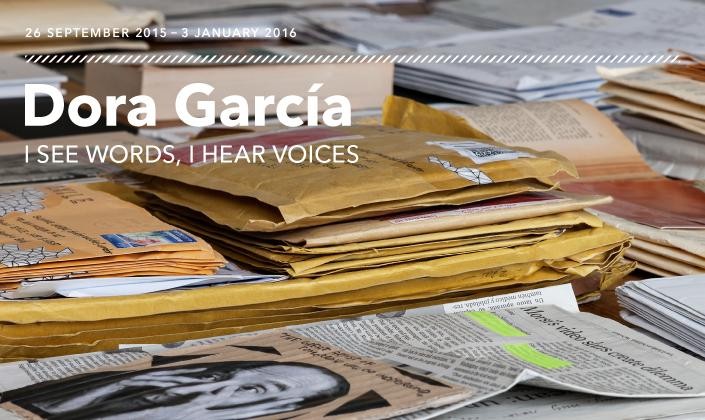 I SEE WORDS, I HEAR VOICES, an exhibition of works by Dora García, takes up numerous facets of artistic experience, language, perception and literature through a constellation of projects that become indices of actions, past or future.
Since 2009, Spanish multi-disciplinary artist Dora García has been carrying out the Mad Marginal project, major stages of which were shown at dOCUMENTA 13 (2012) and the 54th Venice Biennale (2011). Her work examines the wellsprings of artistic experience, altering the traditional relationships between artist, work and viewer, as well as those of the individual, whose daily behaviour she questions through performance, film and discussion. This ongoing project continues at The Power Plant during our Fall 2015 season.

Several universes cross Mad Marginal as García investigates and stages the works of authors James Joyce, Jacques Lacan and Samuel Beckett, to name just a few of the literary references that nourish her thought. Since 2012, García has been exploring deviant literature, exploded language and the unconscious—especially through the figures of James Joyce and Robert Walser—as well as the state of exile and its relation to artistic practice. These dimensions of her practice manifest in Exile (2012–), an ongoing interactive and archival project, as well as in her acclaimed film The Joycean Society (2013), both on view in this exhibition.

In her more recent works, García has shifted her focus to compulsive writing, collective reading, endless or circular books, graphomania and the parallels and intersections between reading and writing, as the works Exhausted Books (2013) and Mad Marginal Charts (2014) reveal. Her explorations of compulsive writing and graphomania also opened up new areas of interest as García began investigating the notion of voice-hearing and other extrasensory perceptions, and their relation to creativity and visionary world-making, even prophecy. ESP (2015) and Imposed Words/Palabras Impuestas (2015) betray a Lacanian accent of language as something that is imposed upon us, and another more Proustian accent of literature as “always written in a foreign language”. All of the works have a performative character and act as indices of an action, past or future. Maintaining traces of continuous and lifelong activity, a strong archival impulse also emerges from these works.

A four-hundred page reader by Dora Garcia and edited by Chantal Pontbriand accompanies the exhibition. The Mad Marginal Cahier #4: I SEE WORDS, I HEAR VOICES brings together major essays by international authors who delve into different threads in Garcia's research. The publication has been co-published by Academy of Fine Art/Oslo National Academy of the Arts, Fonderie Darling/Darling Foundry, Punkt Ø, The Power Plant and Sternberg Press.

Dora García (born in Valladolid, Spain, 1965) lives and works in Barcelona and Oslo. She currently teaches at the Oslo National Academy of the Arts, Norway, and HEAD, Geneva. She is Co-Director for Les Laboratoires d’Aubervilliers, Paris. Her work is largely performative and deals with issues related to community and individuality in contemporary society, exploring the political potential of marginal positions and paying homage to eccentric characters and anti-heroes. She has exhibited her work at numerous international events such as the 54th, 55th and 56th Venice Biennale (2011, 2013 and 2015), the 29th São Paulo Biennale (2010), the 16th Sydney Biennale (2008), Documenta 12 (2007) and Münster Sculpture Projects (2007).
www.thepowerplant.org