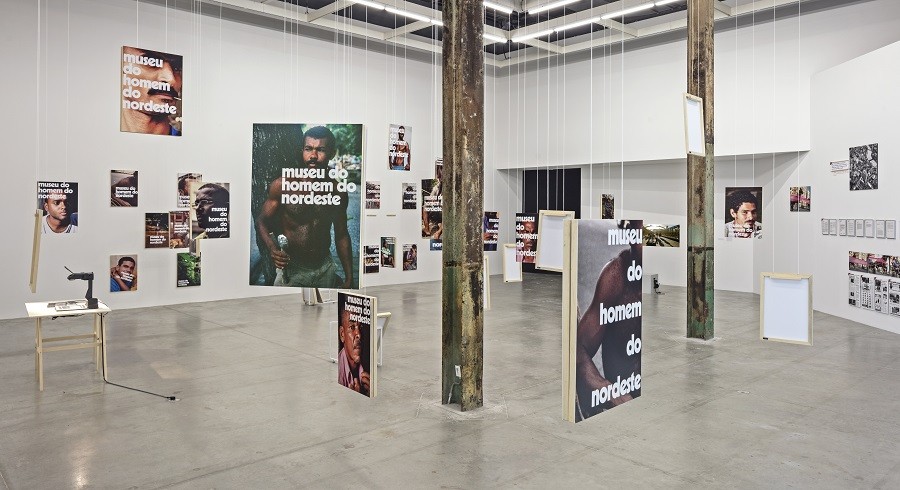 A fish dying in the arms of a man is what first strikes us upon entering Jonathas de Andrade's exhibition. The film O peixe (The Fish) depicts in ten vignettes fishermen cradling their catch, the two species merged in a morbid embrace of sinew and scale. Shot on 16mm film, recalling an ethnographic lens, the work hovers between myth and document. The scenes in the film, simultaneously brutal and tender, confront the viewer with the tension and pathos of the dying process, up until the fish takes its last breath. At that exact moment, the scene moves on to the next couple—man and fish—and the tension begins again, transforming the single action, through endless repetition, into a ritual. The predator is stronger than its prey, the animal. He dominates it, yet he devotes himself to the fish throughout the process of its passing.

Power imbalance is also portrayed in de Andrade’s O Levante (The Uprising), where the artist organized the first horse-drawn cart race in the centre of Recife, a city in the northeast of Brazil. Horses are usually prohibited throughout the town, but they exist out of sight in the suburbs: a socially-deprived, parallel society excluded from the city’s economic and cultural centre. To obtain the municipal permit to stage the event, de Andrade announced his intention to produce a feature film. It was only the assertion of a fiction—the “fictitious fiction”—that allowed the suburb’s everyday reality to seep into the stately boulevards of the city centre. In O Levante, the city becomes the stage, but the protagonists are not actors and the narrative is not invented.

Both works elucidate that all realities are socially constructed. Depending on the power relations in place, some realities dominate and define, while others are marginalized. Based on the realities of these peripheral societies, de Andrade’s works become the vessel through which those lived experiences can unfold upon a stage that he has constructed.

In his work Cartazes para o Museu do Homem do Nordeste (Posters for the Museum of the Man of the Northeast), de Andrade revisits the construction of the national identity of Brazil’s north-eastern region, which is largely shaped by the country’s colonial past and slavery. In his book Casa-Grande e Senzala (The Masters and the Slaves) (1933), sociologist Gilberto Freyre posits that “racial democracy” has been achieved in Brazil as the result of the “miscegenation” between indigenous peoples, Portuguese colonizers and African slaves–a theory that informed the narrative of the anthropological museum in Recife, founded in 1979. While Freyre introduces multiculturalism as a positive force, this theory is controversial given the lived experience of racism. Through a series of posters of portraits of local workers, who were engaged by de Andrade through ads in the local newspaper, the artist questions the resonance of the museum’s narrative in the present. Combining these portraits with the Museu do Homem do Nordeste's problematic terminology, de Andrade proposes a new set of imagery for the museum, thereby revealing and deconstructing embedded stereotypes.
www.thepowerplant.org