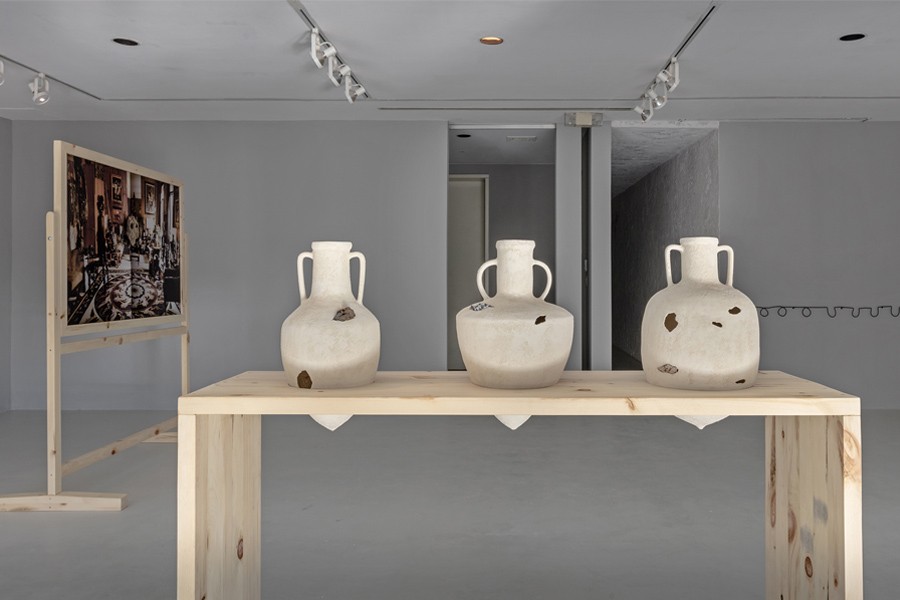 Maria Loboda’s exhibition at The Power Plant, the first solo exhibition of her work in Canada, presents an installation of recent and newly commissioned works by the artist that emerge from her ongoing research into archeology, healing processes, anthropomorphism and the predynastic era.

The title of the exhibition, Some weep, some blow flutes, refers to Laozi’s Tao Te Ching (6th century BC), an influential philosophical text in both Taosim and Confucianism. The text’s poetic structure has elicited many interpretations, beginning from the perspective that the defined path is not the enduring way forward, instead placing emphasis on the importance of remaining attuned to connections. Similarly, the photographs, sculptures, installations and wall drawings in this exhibition explore multiple ancient belief systems.

One such belief system influencing this exhibition is the doctrine of Tetrapharmakos (τετραφάρμακος), known as the “four-part remedy,” originally a combination of four elements: wax, tallow, pitch and resin. It came to be used by Roman-era Epicureans as a set of recommended remedies to avoid anxiety and heal the soul. Several works in the installation reference attempts to support or heal bodies, minds and objects. In the wall installation, You and I are earth, minerals found in mountains and are readily consumed as health supplements are embedded on the surface of the wall. In The Long Yawn, an onomatopoeic word in bent steel crawls along the wall, a manifestation of both exhaustion and radiance. Elsewhere in the space, The unattainable original condition, is an installation of ceramic containers known as amphorae, their surfaces first cracked and later patched by well-intentioned but imperfect restoration.

Loboda's two-sided photographic installation Early Dynastic Period I II III IV V etc., highlights perception. In these images, a simple stone with two small holes, placed on an image of a lavish apartment, seems to become a face with two knowing eyes. The relationship between the part and the whole, human hopes and transitions and approaches to healing and rejuvenation are central to this body of work. The simple stone has the potential to take on human form, the sculpture’s features may dissolve into ruin in the passage of time, and the figure may become a simple stone once again.