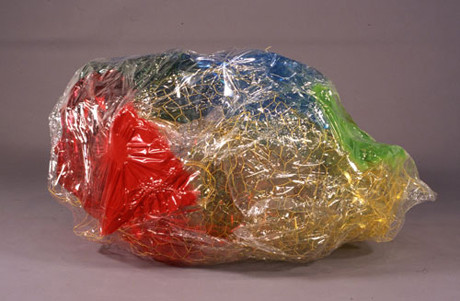 © Michael Murphy (Toronto, ON)
In This Colony , 2009.
Spray paint, wire netting, coloured plastics, tape
Courtesy of the artist.
NOTHING TO DECLARE
Current Sculpture from Canada

Abandoning sculpture’s traditional job of memorializing the great and the good, the artworks in this exhibition instead revel in humble materials and everyday processes. Resisting abstract and overarching statements, meanings and metaphors result form intensive experimentation and improvisation. As such, the show highlights the renewed interest of contemporary artists – emerging, mid-career and senior – in objects and materials. The work explores sculpture’s status and function, its history and future.

Often straddling the boundary between figuration and abstraction, elegance and awkwardness, invention and decay, the works in the exhibition can seem ambiguous, open-ended and messy. This tentative quality mirrors the mood of our uncertain times, while the artists’ ad hoc working methods suggest resourcefulness in the face of adversity. At times it is not clear if the artists are in charge of their materials or if the materials are in charge of the artists. Some artworks appear to battle against gravity or deflation while others seem to have accepted the inevitability of entropy, disintegration and disappearance.

Unassuming craft, household and DIY production processes dominate. Where the artists do use conventional sculptural techniques and media, they put them to mischievously paradoxical ends. Many incorporate pre-existing objects and substances, especially those with little financial or cultural value. While such strategies so recycling might suggest an environmental impulse, few works in the show are explicitly political. Instead they tend to make their points with lightness, wit and humility, with “nothing to declare.”

Yet, as is often the case when we make such a claim, this show smuggles in foreign baggage: partly by mixing unexpected materials and references, but also by combining artists born in Canada with those who have immigrated to the country, creating a heterogeneous picture of Canadian creativity. Taking place in conjunction with a solo exhibition by the internationally renowned Canadian artist Michael Snow, ‘Nothing to Declare’ continues The Power Plant’s twenty-two-year tradition of presenting Canada’s most engaging and influential contemporary artists in an international context.

This exhibition will be accompanied by an essay by curator Helena Reckitt in SWITCH, The Power Plant’s biannual magazine of contemporary art.