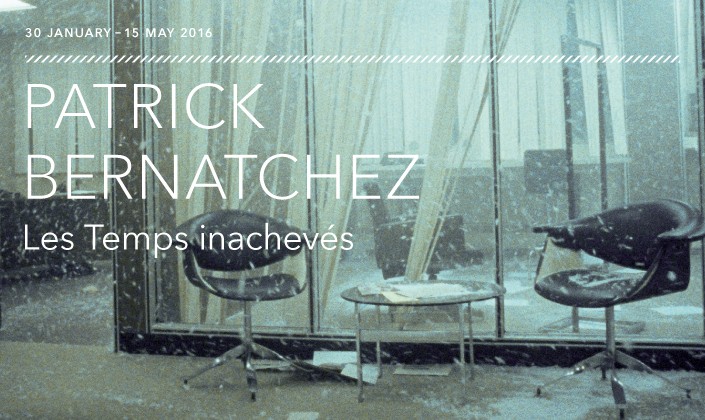 Les Temps inachevés brings together a selection of works by Canadian Montreal-based artist Patrick Bernatchez drawn from two cycles that span years of conceptualization, creation, production and presentation: Chrysalides (2006-13) and Lost in Time (2009–15). This exhibition provides an opportunity to examine the scope of an interdisciplinary, polymorphous practice that embraces film, sound, sculpture and photography, in addition to painting and drawing. The title of the exhibition, which may be translated as “unending times,” refers to the evolutive nature of Bernatchez’s practice, in which each work, cycle and exhibition is considered by the artist as being open-ended.

Triggered by the chance discovery of a notebook in which mould patterns had grown, Chrysalides revolves around questions of life and death, the passing of the seasons, growth and decomposition, metamorphosis, mutation and transformation, decay and contamination. The Fashion Plaza, an industrial building in Montreal where the artist had his studio for many years, is the locus of the cycle - at once production site and exhibition venue, subject and shooting location, metaphor and allegorical device. The cycle, which began in 2006 with a series of graphite and ink drawings, was completed in 2013 with the sound installation Fashion Plaza Nights. It also includes t trilogy of films I Feel Cold Today, Chrysalide and 13, which together provide a portrait of the building’s inner workings, architecture and inhabitants.

Time in all its dimensions is the overriding leitmotif of Lost in Time: past, present and future, lived time, cosmic time, performative time, time travel, the space-time continuum. Thus far, the cycle comprises over twenty works, including films and videos, audio recordings, sound-based installations, photographic and etched-mirror works, and sculptural objects. At its centre is BW (2009-11), a watch that measures millennia, its single hand taking a thousand years to make a full rotation. In Lost in Time (2014), a feature-length film completed for the exhibition, two parallel narratives intertwine: the first follows a helmet-clad, faceless horse and rider adrift in an indeterminate landscape of ice and snow - quite literally lost in time and space - while the second seems to allude to a strange scientific experiment.

Circles, spirals, rotations, revolutions and repetitions are omnipresent in Patrick Bernatchez’s work. From the circularity of the passage of time to the rotating and revolving of vinyl records, musical scores, camera movements and narrative arcs, these geometric figures and actions function on visual, metaphorical, allegorical and structural levels.
www.thepowerplant.org