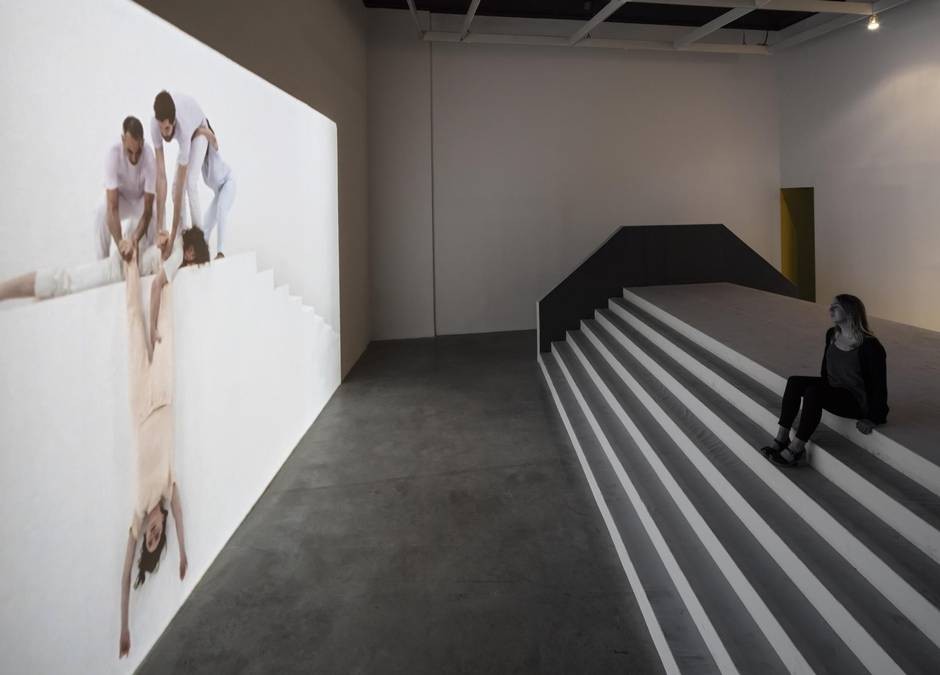 Ulla von Brandenburg's major exhibition will include a new film and installation, both responsive to the site where the film is shot, Théâtre des Amandiers, France, and the space of the exhibition at The Power Plant.
Ulla von Brandenburg has developed a visual art practice in which films, performances, sculptures, installations, books and drawings exist side by side. The apparatuses in her films and installations echo those found in the history of theatre and stage design. Her work explores states of consciousness that allow the characters in her films and the viewer to experience worlds caught between past and present, reality and illusion, the sacred and the secular.

It Has a Golden Red Sun and an Elderly Green Moon, von Brandenburg's first solo exhibition in Canada, brings together five recurring themes in her work: colour, ritual, movement, stairs and textiles. The inspiration for these themes are drawn from the architecture of modern theatre and theorist Adolphe Appia's stage designs; the dances of movement theorist Rudolf von Laban and the Judson Dance Theater; the work on movement by playwright Samuel Beckett and the artist Bruce Nauman; and John Cage's musical constructions on randomness.

The exhibition features the new commissioned film It has a Golden Sun and an Elderly Grey Moon (2016), co-produced by The Power Plant, Toronto; the Australian Centre for Contemporary Art (ACCA), Melbourne; the Darling Foundry, Montreal; Aarhus 2017: European Capital of Culture, Denmark; and Museum Haus Konstruktiv, Zurich. unfolds in a large installation designed for this particular site. It operates simultaneously as both a stage set and a film.

It Has a Golden Sun and an Elderly Grey Moon (2016) takes place on the stage of Théâtre des Amandiers in Nanterre, France. This space is structured by two large staircases that serve as a platform. Comprised of different levels, the staircase is a means of architecturally representing hierarchies in space. The various actions taking place are embodied by dancers’ simple movements and their handling of coloured pieces of fabric. The film is presented in a black and white scenography that mirrors the stage on which the action of the dancers takes place.

Alongside the new film and installation, The Power Plant presents a survey of von Brandenburg’s film works in an installation designed by the artist. The selection includes Die Strasse (2013), Singspiel (2009) as well as The Record (2005-2014), which was filmed in Toronto.

It Has a Golden Red Sun and an Elderly Green Moon is presented concurrently with an exhibition at the Darling Foundry, Montreal.
www.thepowerplant.org