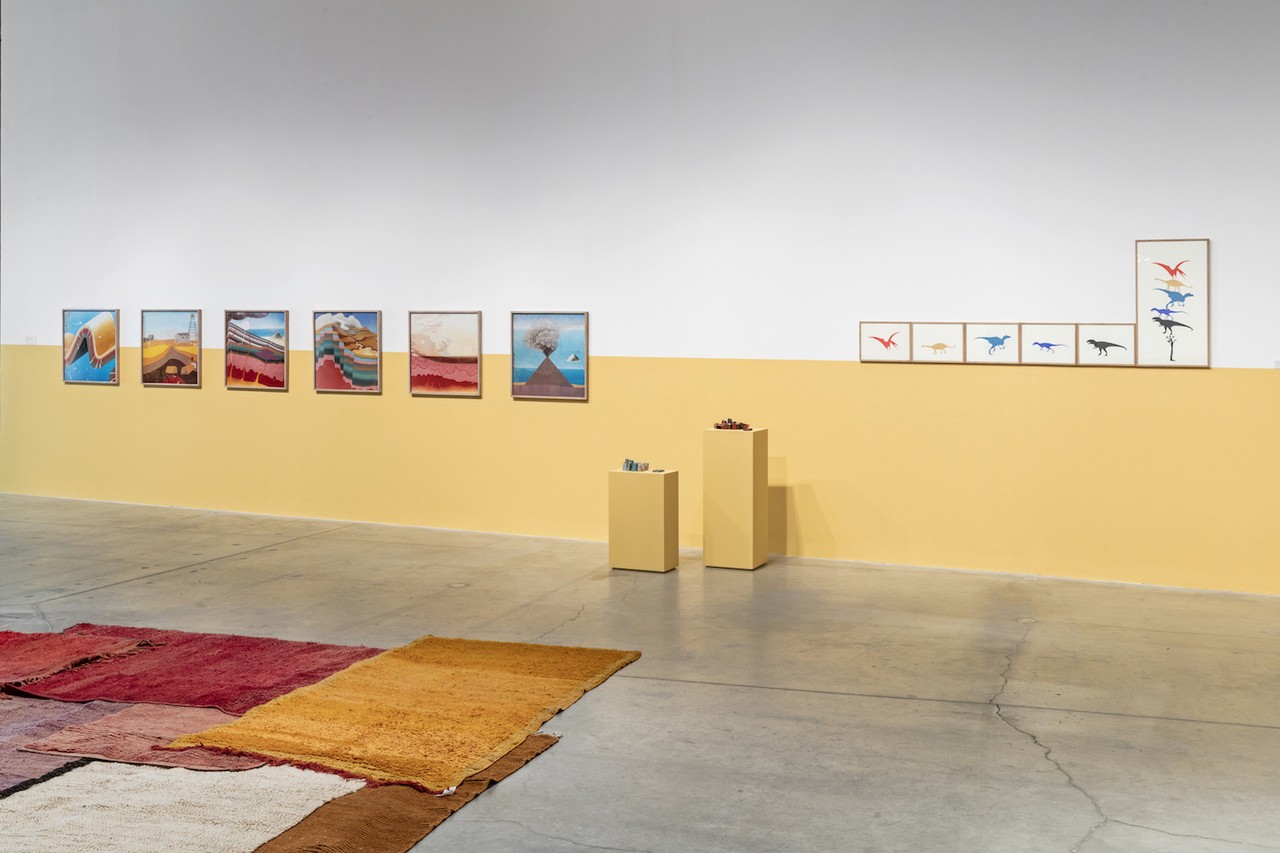 The Power Plant presents a solo exhibition of Yto Barrada featuring her new body of work Faux Guide (2015-ongoing), in which the artist explores the Moroccan fossil and mineral trade.
Yto Barrada’s solo exhibition at The Power Plant continues her recent work around fossil evidence, paleontology, museology and natural history in Morocco. Millions of years ago, today’s Sahara desert was a tropical paradise covered in vegetation, lakes, and a river as wide as the Danube and full of fish ten feet long. Today, the now arid space between Morocco’s Atlas Mountains and the Sahara desert are home to a hardscrabble cottage industry of excavating, preparing, forging and selling fossils.

At the center of the exhibition is the film Faux départ, which observes the elaborate fossil industry along the so-called “Dinosaur Road.” It pays homage in particular to the “preparators” in this region between the Atlas Mountains and the Sahara desert, whose intrepid work is fueling a thriving trade in artifacts real, faux and hybrid. The film is a rebuke to the fetishistic thirst for foreign objects, a sly meditation on authenticity and a paean to creativity.

The exhibition includes a comprehensive selection of works from Barrada’s new series, Faux Guide, including photographs of children’s toys from North Africa (North African Toys Series) which are part of the collection of the Musée du quai Branly in Paris, assembled by French ethnographers in the 1930s. Alongside the exploration of this rich pre-history and its underground economy, the work examines how we look at and construct history through the collecting of objects and the status of artifacts in museum collections.

Structuring Faux Guide like a personal museum, Barrada further explores the real/fake binary along with the fetishization of foreign objects, as in Untitled (Orthoceras Coca-Cola bottles), where fossils in the shape of Coca-Cola bottles force us to question the ways in which museums confer value on objects. Barrada’s ingenuity is further demonstrated in the Plumber Assemblage, which features objects Barrada acquired (in the tradition of Marcel Duchamp’s "readymade" objects) in the Grand Socco Square of Tangier, Morocco. Here, bricolages wrought from plumbing elements including pipes, faucets and spigots are used by out-of-work plumbers to signal their availability for hire. As with the fake fossils, Barrada’s work offers a glimpse into the artisan’s inner life.

Geological time becomes one possible axis for reading the exhibition through the work Geological Time Scale (Mid-20th Century), a set of boldly coloured Berber carpets that correspond to the brightly painted walls of the gallery. Here, fossil history points to our shared roots in Pangaea, the long-dispersed supercontinent, the existence of which was confirmed by the discovery that the same fossils dug up in Morocco were also unearthed in the United States, long before notions of cultural patrimony and the exercise of national narratives would have framed such findings.

Other fictions explored in the exhibition grow out of Barrada’s ongoing concerns, such as those revealed in the film A Guide to Trees for Governors and Gardeners. The film which shows us the streets of a shabby, nondescript city, in which pristine sidewalks and lush palm trees spring up temporarily ahead of the arrival of an official motorcade – offering a brief peaceful, prosperous Potemkin image of urban life – only to return to their sorry state moments later.

The artist regularly incorporates educational material in her practice, addressing its capacity to shape narratives the way the artifacts in this exhibition might. In this case, the title, such as Untitled (painted educational boards found in Natural History Museum, never opened, Azilal, Morocco), clues us into the unused potential of these found archival objects and directs our attention to the lack of local institutionalized interest in the discipline.

The exhibition is accompanied by the artist’s book, A Guide to Fossils for Forgers and Foreigners, available in three languages and published by Walther König, Cologne and co-produced by Museu de Arte Contemporânea, Porto; Carré d'art – Musée d'art contemporain, Nîmes; and The Power Plant Contemporary Art Gallery, Toronto.