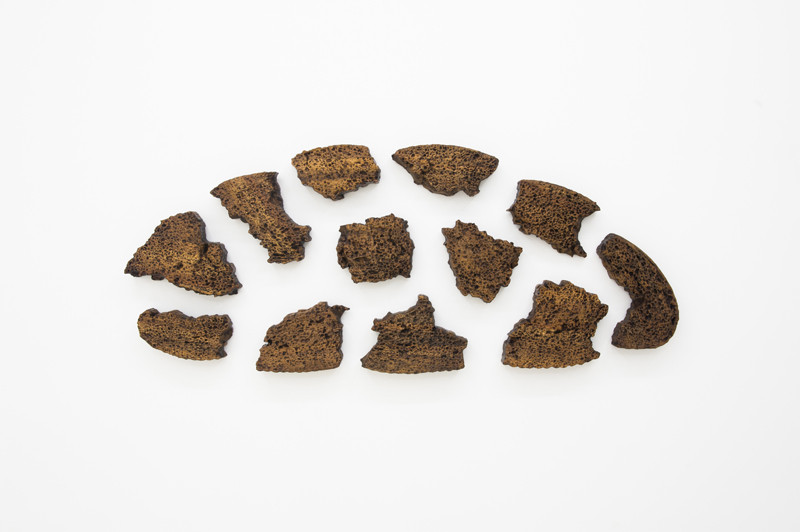 Thomas Brambilla gallery is proud to present Cadavre Exquis and Dodici Suicidi, the first solo show of Anatoly Osmolovsky for a European gallery.

The exhibition's title refers to the central work of the solo show (a reinterpretation of the Last Supper by Leonardo da Vinci made in 1:1 scale) and refers to a famous surrealist practice - Cadavre Exquis - a process of collective creation of a text or an image in which each participant write or draw without knowing the contribution of others.

The installation is composed of twelve metal circles filled by butter, representing the apostles, covered with golden leaf. Jesus is represented by an electrical transformer from which unfolds a network of orange electric cable that goes to connect with all metallic circles. Jesus is the source of radiant energy. Each metal circle is also backlit by a yellow and warm light that melts the butter that drips on the wall and on the floor, forming irregular stripes, heaps and yellow spots. The apostles therefore contain two complementary aspects: the golden leaf and the circle recall the immaterial and spiritual dimension, while the butter and the drippings recall the corporeal, material and earthly dimension. In the position corresponding to Judah, the golden leaf is broken by a gash from where you can see a short circuit in place, a blue flash that emits a high-pitched and shocking sound. Judah then is the point and the moment in which the energy undergoes a short circuit, a deviation from its course.
The Twelve Apostles - Twelve suicides gravitate around the central cadavre exquis, in a game of ambiguity between life and death.
The elimination of Leonardo’s elegance and malice give way to a symbolism that emphasizes the social and political dimension of the work. While never abandoning a formal appearance dear to Osmolovsky and typical of his poetry.

To continue the message of the mural are the famous Bread Series, also featured in the show, which are nothing more than icons of wood or bronze with carved surface. The twelve pieces of the slice of bread in the show evoke the theme of the Twelve Apostles - Twelve suicides (Dodici Suicidi) installation. The elimination of the sacredness of the iconic image gives way to a different and symbolic spirituality.
www.thomasbrambilla.com