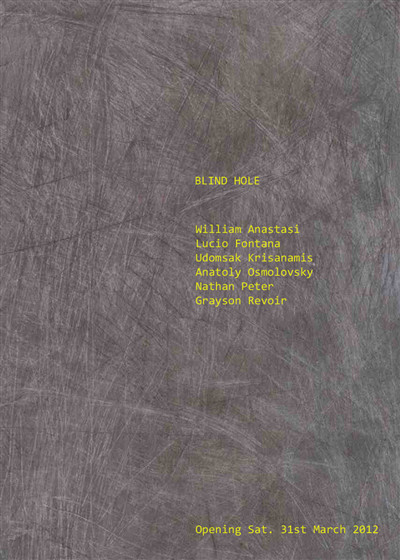 In the latest history of art the obsession for void and chasm is a constant. Since Lucio Fontana and Piero Manzoni till the latter Anish Kapoor, absence and filling of void have always been main topics. It’s a necessity, for art and perhaps for humanity itself, to understand void and absence and shape it into an image, an encoding, a measure so this extension becomes less terrifying.
The notion of blind hole has a specific value in engineering. Indeed it means a duty excavation useful to succeed in the work more quickly, as in construction of undeground lines. This method often implies that the ground around the empty space is going to collapse, so normally a fast grip chemical treatment gets the ground stuck and self-standing.
While within the matter it’s possible to find a structural and actual solution to fix and somehow define the void, in spirituality and inner life the absence dimension has a tough connotation that in contemporary art turns into an endless range of shapes: dramatic, ironical, iconic, iconoclastic.
In fact the exhibition starts from this point to explore how the contemporary artist deals with what invariably becomes a spiritual void.
As in Anatoly Osmolovsky the vision of orthodox icon turns into an excavation of wooden depth lookin for a saving image, so in William Anastasi a completely grey surface becomes an empty abstraction, which remains just the graphic track.
Nathan Peter, cutting out the stars from the United States banner, through subtraction returns to the flag itself, that appears just an empty symbol, at least an aesthetic and artistic value.
Udomsak Krisanamis and Grayson Revoir instead work on detail and particular dimension. Revoir tries to drill with screws and metal nails a table or a ladder, Krisanamis paints every single centimeter of the canvas with dry brush strokes to overlay all lines and text on the paper covering the canvas. Only the concave spaces of the round letters O, B, D, 9 remain, then, the blind holes.