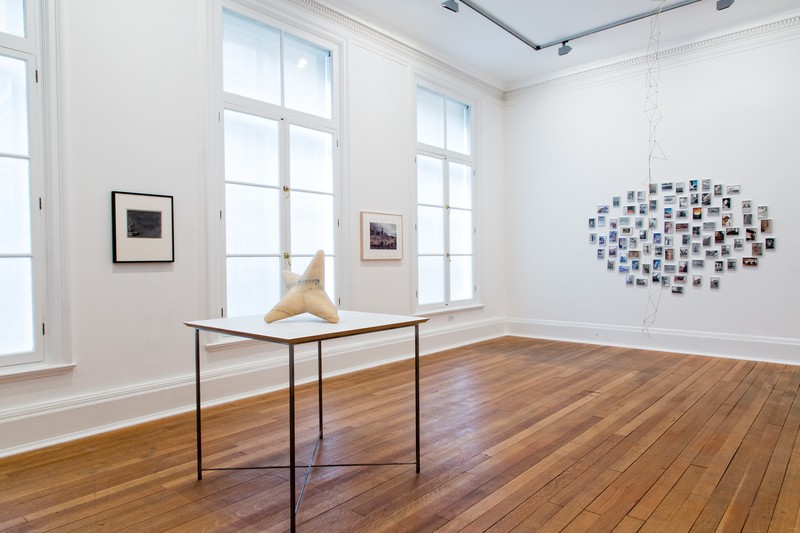 The Directors of Thomas Dane Gallery are pleased to announce two concurrent exhibitions that explore the interrelation between photography and architectonic forms. These two artistic media have been intimately inter-related since the birth of photography when the French inventor Nicéphore Niépce documented the facades and rooflines of a group of buildings in his 1826 work View from the Window at Le Gras.

In Luisa Lambri's third exhibition with the gallery, the Italian photographer shifts her attention from her previous concern with the light and space of modernist architecture to an investigation of the topography of the skin of abstract post-war modernist sculpture. Featuring new bodies of photographs that look at the works of Donald Judd, Lygia Clark, Charlotte Posenenske, and Barbara Hepworth, Lambri continues her poetic exploration of our phenomenological experience of man-made forms.

In a series of photographs devoted to the milled aluminium box sculptures of Donald Judd that are permanently on view at the Chinati Foundation in Marfa, Texas, Lambri treats the surface of these works as a reflective lens that casts the light of the world back at us as a ghostly afterimage. Rigorously framing her subjects only in detail, the resulting photographs invoke the viewer into the aura of their ethereal glow while emphasizing the subtle shifts of perspective involved in the multiple formal iterations of Judd's own serial process. The artist continues this exploration with her more hard-edged images of Lygia Clark's bichos, hinged aluminium geometric sculptures meant to be handled and manipulated by the viewer in a physical implementation of the Brazilian Neo-Concrete artist's adherence to the philosophy of phenomenology in the 1960s. Focusing on the joints linking the different geometric surfaces of these works, Lambri's photographs abstractly capture their endless ability to reconfigure space when manipulated by a subject. Moving from the dynamism of Clark's bichos to the colourful and playful convex and concave shapes of Charlotte Posenenske's aluminum sheet metal sculptures, Lambri explores the invisible perceptual infinities of the fold. Finally, in her consideration of a Hepworth sculpture in a garden in St. Ives, the artist brings her lens to bear on the circular aperture at the heart of this abstract work showing it to be a portal into another world and echoing her ongoing interest in how architecture frames the natural world.

In these subtle and evocative abstract photographic works, Lambri uses her camera to poetically explore the almost hallucinatory spatial geometries of some of our best know abstract modern sculptors. In the end though, they are less a reflection of a direct interrelationship of photography to sculpture than they are an exploration of how these built forms create imagined spatial territories akin to those of the modernist buildings of her previous subjects ranging from Oscar Niemeyer and Scarpa to Barragán and Lautner. In both cases, Lambri's vision helps us cross through the looking glass into the unseen interiors just beyond the perceptible surfaces of these works in order to reveal new worlds and poetic possibilities.

Taking its cue from Luisa Lambri's photographic explorations of sculptural form, the exhibition Blind Architecture, curated by Douglas Fogle, brings together over twenty artists who each in their own way examine the liminal intersection of photography, sculpture, and architecture. Taking its title from Kasimir Malevich's description of his architektons - geometric, quasi-architectural maquettes lacking apertures and hence "blind" - this exhibition brings together a group of historical and contemporary artists who each in their own way explore this notion of "blind architecture" found at the intersection of the poles offered to us by Niépce and Malevich. Bound by neither the traditional structural limits of medium nor content, these artists explore the interrelationship of architecture, the medium of photography, as well as the realms of drawing and sculpture.

The earliest works in the exhibition range from photographic documents of abstract architectural sculptures from the Soviet VKhUTEMAS Workshops in the 1920s and Alexander Rodchenko's constructivist vision of electrical transmission towers, to Man Ray's 1920 photograph Dust Breeding in which Marcel Duchamp's Large Glass takes on the characteristics of an alien architectural topography. One can also see the blindness of architectural form at play in Sol Lewitt's cut out aerial maps as well as in Bernd and Hilla Becher's typologies of soon-to-disappear generic industrial buildings in which their neutral photographic technique combined with an almost compulsive seriality transforms their chosen subjects into what they called "anonymous sculpture." Luigi Ghirri, Robert Grosvenor, and Nasreen Mohamedi explore the photographic poetics of existing architectural forms in their works while VALIE EXPORT investigates the relationship of the human body to the built environment of the city. In his Psychobuildings, Martin Kippenberger subjectively documents the idiosyncratic in architecture while Imi Knoebel harkens back to Niépce in his experimental Projektion photographs in which the artist plays with the medium itself by projecting geometric shapes of light onto the facades of buildings at night and then documenting them. This playful use of the medium continues in Geraldo de Barros's Fotoformas series with its multiple exposures and Walead Beshty's crumpled cyanotypes which both partake in a formal exploration of the possibilities of geometric photographic abstraction. More recent generations of artists using photography have similarly embraced an inquisitive attitude to the architectonic forms in the world around us. Whether in Gabriel Orozco's occasional photographs of discretely poetic fleeting moments in the everyday world, in the Man Ray-inspired photographs of forlorn abstracted landscapes made of paper by James Welling, or in the monumental quietude of Catherine Opie's Freeway series we see a number of artists looking at the world through a lens inflected with a way of seeing embodied in Malevich's architectural blindness.

Blind Architecture moves from two to three dimensions in the work of Lygia Clark whose early 1960s matchbox sculptures, Estruturas de Caixa de Fósforos, evoke dreamlike, unrealized modernist buildings using the simplest of materials. This exploration of space and architectonic forms continues in a group of contemporary artists as well. Rachel Whiteread's rubber cast of a floor takes on the ghostly appearance of a photographic negative, while Ricky Swallow's bronze abstract still life invokes the spirit of Malevich's architektons. We see an updated fulfilment of the architectural blindness in the hanging brass grids of Leonor Antunes that take their abstracted dimensions from the invention of the meter in the late 18th century, or in Jean-Luc Moulène's Pentapole, a five starred onyx sculpture that is based on the mathematically derived geometry of concrete wave breakers. In Gabriel Sierra's sculptures composed of straw placed on top of vintage copies of the architectural magazine Domus, or Ron Nagle's playful ceramic Chewing Gum Monuments, the hubris of the world of heroic architectural structures is subtly subverted in these humble and whimsical abstract forms. Finally, in the typewriter drawings of Carl Andre we see the merging of concrete poetry and typography into a new kind of architectural form in which words themselves are the building blocks.