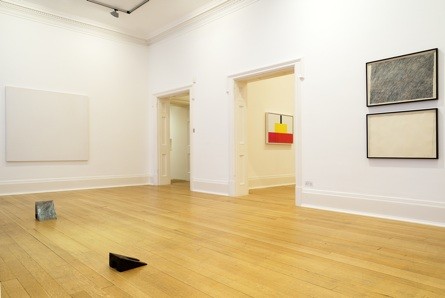 Karsten Schubert, Richard Saltoun and Thomas Dane are pleased to host the first exhibition of Bob Law since the artist’s death in 2004. Law was arguably the foremost British minimalist artist of the 1970s, yet somehow he has become almost forgotten – written out of the narratives of postwar art. It is the goal of this exhibition to consider the art in depth and, hopefully, begin a long-overdue reappraisal of a remarkable life’s work.

The exhibition – in two parts – brings together a diverse range of works, offering a retrospective view of Bob Law. At Thomas Dane Gallery an example of the white Castle paintings from the mid-1970s meets a colourful Castle Painting from the 1990s. Early landscape drawings and late sculptures previously unseen are joined by one of Law’s most famous works Mister Paranoia V (1971). Karsten Schubert / Richard Saltoun present a series of Black Watercolours from the late 1980s in conjunction with a large Black Drawing (1971), a renowned Black painting (1980) and paintings from the Kisses and Crosses (2003) series. These works are joined by quintessential examples of Law’s sculptural work: a large obselisk and several small iron works.

Bob Law’s artistic career started in the late 1950s when he moved to St Ives. Inspired by the landscape, he made some of his most famous works whilst lying on his back in a field. These seemingly simple outlines around the perimeter of the paper lead to a minimalist exploration of lines, shapes and forms. Pushing these boundaries, Law went on to make a series of black paintings out of different combinations of dark colours that were exhibited at the Museum of Modern Art Oxford in 1974. These included Number 52 Black Plum Black Mauve (1966) and Number 87 Violet Black Violet Blue (1970). Law explained of these and other series: “I’ve set myself philosophies which I invent myself.”

A prolific artist throughout his lifetime, Law also struggled with ideas surrounding the legitimacy and significance of abstraction. He took up sculpture in the 1980s, which extended and expanded his oeuvre. His vocabulary of elemental forms, traditional symbols and primary colours, can be seen across his paintings, drawings and sculptures. They include fields, houses, castles, chairs of rectangles, triangles, crosses in red, yellow and blue.

His works have been exhibited worldwide including the ICA, London; MOMA Oxford; Kunsthalle, Bern and his work is now in collections including the Tate, the Guggenheim and the Gallery of New South Wales.

The first monograph dedicated to the life and work of Bob Law will also be launched on this occasion. The book brings together the largest group of paintings, drawings and sculpture by the artist to date. In addition to 300 images, 6 texts present different moments and themes in Law’s work. Anna Lovatt explores the role of drawing throughout; Jo Melvin introduces pivotal exhibitions during the 1960s and 70s; Anthony Bond provides an overview of the work and its relationship to art history and David Batchelor revisits his 1999 essay which describes visual and conceptual themes in Law’s work. Richard Cork’s 1974 interview with Bob Law as well as Giuseppe Panza’s recollection of the artist are both reproduced in this volume. Published posthumously by Ridinghouse, this book will endeavour to fill this void and to serve as the authoritative volume on Bob Law.
www.thomasdane.com