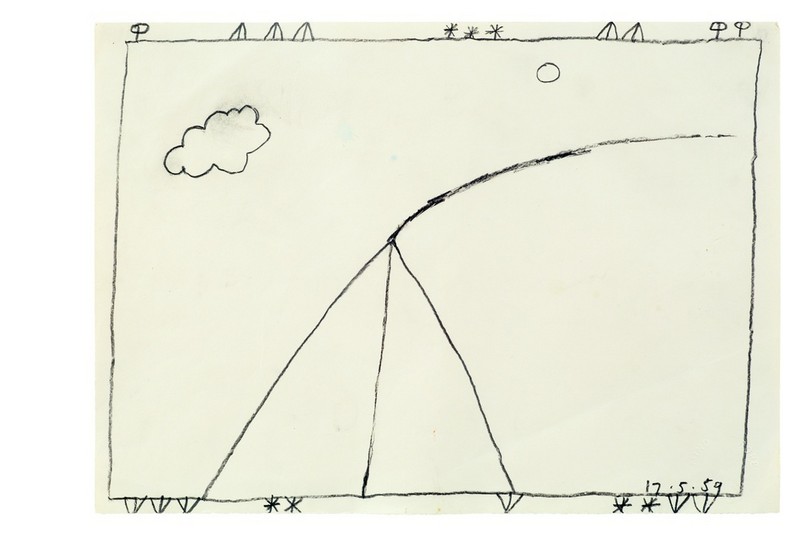 "Neither simply a Minimalist nor completely grounded in the iconoclasm of Conceptualism, Bob Law seems to have occupied a unique middle position within the constellation of post-war international contemporary artists."
Douglas Fogle, 2015

During Bob Law's stay in St Ives in the late 1950s, the British artist worked intently on a series of Field drawings, which reduced elements observed in the surrounding landscape - the sun, trees and clouds - into a set of abstract signs. In each work, the carefully positioned icons are contained within a single rhomboid frame and dated, illustrating Law's exploration of line to convey space and mark time. The Field drawings were, for Law, 'about the position of myself on the face of the earth and the environmental conditions around me [...] I was finding myself, and the map that went with myself. I was transcribing it graphically into charts'.

Using these first mature works as a starting point, this exhibition focuses on how Law refined his abstract language in subsequent drawings and paintings throughout his career. Characterised by a near-blank pictorial field delimited by a thickly drawn line, Law simultaneously produced two groups of works during the 1960s that explored the play between darkness and lightness: the densely coloured 'closed' drawings and the sparse 'open' drawings.

Developing ideas first executed in drawing, Law's paintings share similar concerns. In Metaphysical Fantasy No.10 (1960), for example, Law reworks the line in paint and fills the frame with thick black paint. Whilst in Mister Paranoia IV 20.11.70 (No. 95) (1970), the irregular rhomboid frame seen in the early Field drawings is rendered on a monumental scale. As Douglas Fogle writes in the exhibition catalogue, the expansive dimensions of this work suggests 'not so much a painting as a portal that could physically engulf the viewer, offering a passage to another space, time or dimension.'

Presenting a concise overview of the artist's career, the show closes with a selection of large Castle paintings (1976-80) as well as two bodies of later drawings from 1995 and 1999, in which Law alters the proportion of the line to test ideas of the void and negative space.

A fully illustrated catalogue published by Ridinghouse - featuring works from throughout Law's career - accompanies the exhibition. It also includes new scholarship by Douglas Fogle, an independent curator and writer, on the relationship between Law's work and his American contemporaries.
Born in 1934, Bob Law rose to prominence in 1960 through a two-person exhibition at the Institute of Contemporary Art, London. The artist's work has been exhibited worldwide including at Kunsthalle Bern, Bern; Museum of Modern Art, New York; Secession, Vienna; Serpentine Gallery, London; and Whitechapel Gallery, London. Notable public collections include Arts Council of Great Britain; Solomon R Guggenheim, New York; Stedelijk Museum, Amsterdam; and Tate, London. A comprehensive monograph on the artist, Bob Law: A Retrospective (Ridinghouse), was published to coincide with a major survey of the artist's career in 2009 at Thomas Dane Gallery and Karsten Schubert.
www.thomasdane.com