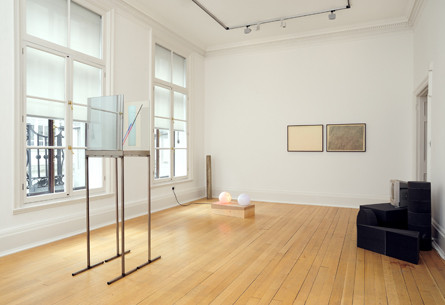 We are pleased to announce the opening of Double Object, a group exhibition at Thomas Dane Gallery, curated by Leigh Robb.

The show was first conceived and staged on 14 June, 2008 at Occasionals, an artist run project space organised by Philomene Pirecki in her studio (www.occasionals.co.uk). Leigh Robb invited six London-based artists to respond to the idea of the double object: Bradford Bailey, Vanessa Billy, Jason Dungan, Elizabeth McAlpine, Sam Porritt and Maria Zahle. Also included were works from the 70s by Dieter Roth and Barry Flanagan, as well as more recent pieces by Glenn Ligon and Michel François.

For the Thomas Dane show, the Occasionals exhibition will be re-staged in one of the gallery spaces. Becoming a double object itself, the show will include new works by the original group of artists. It will also be expanded to include work by Philomene Pirecki and historic pieces by other artists whose use of doubling or pairing is integral to their practice, such as Roni Horn, Felix Gonzalez-Torres, Bob Law and Dieter Roth/Richard Hamilton.

This exhibition becomes an expanded site of research. Many of the artists are presenting new works which further investigate the potential of the double, and how such a simple construct can open up a more complex field of possibility both formally and conceptually. From a pair, copy or diptych to studies in repetition, synchronicity and comparison, the double is a structure that forces questions of singularity and difference. This exhibition is an opportunity to think about why it recurs as a pivotal strategy both historically and for artists working today.
www.thomasdane.com