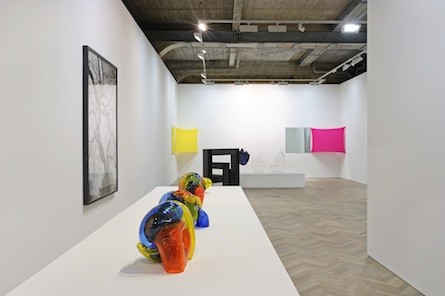 The Directors of Thomas Dane Gallery are pleased to present an exhibition of new works by the seminal French artist Jean-Luc Moulène. This comes in the wake of a year-long survey at the Dia Art Foundation, Beacon, NY (until 31 December) and his first UK museum show at Modern Art Oxford (until 25 November).

Over three decades, Moulène has slowly built a body of work, which is characterised by the absence of a unifying aesthetic signature. His photographs (Documents) and sculptures (Objects) frustrate classification and form part of loose compendia, which he builds according to his idiosyncratic logic.

Extending the knot taxonomy which is his present focus - Knot Knot - is larger and more imposing than any Moulène object to date, bar one (the monumental Body, in Dia Beacon). It carries with it references to architectural models and prototypes for monuments, melding both the geometric and the organic of much of his previous 3-D work. Other more human-scaled objects in the exhibition are set on tables, on the floor or on the walls. These reveal Moulène's utopia of the 'artist-constructor', which may be the by-product of a decade spent as an artist embedded in the naval behemoth, Thomson-Sintra Activités Sous-Marines.

The photographic presences in the exhibition all spring from his first and only stay in New York last year. They constitute an informal record keeping of the city that had been relatively alien to him until recently. These documents brush against, but still escape, the historical pantheon and academic photography classifications of the still-life (Grand Street), the landscape (Figure (Tree)), the portrait (New York Catalogue Girl) hinting at an infinitely wider, yet less trustworthy, universe of possible images.

A suite of four monochrome panels 'Echantillons (Samples)' - laboriously 'painted' with black, blue, green and red BIC ink are an homage to standardised industrial production while at the same time acknowledging the more obvious artistic precedents of Yves Klein, Robert Ryman, Alighiero Boetti and recent preoccupations with abstraction in photography.

Jean-Luc Moulène was born in Reims in 1955. He studied literature and philosophy at the Sorbonne University where he was awarded a doctorate. He lives and works in Paris. This will be his third exhibition at the gallery.
www.thomasdane.com