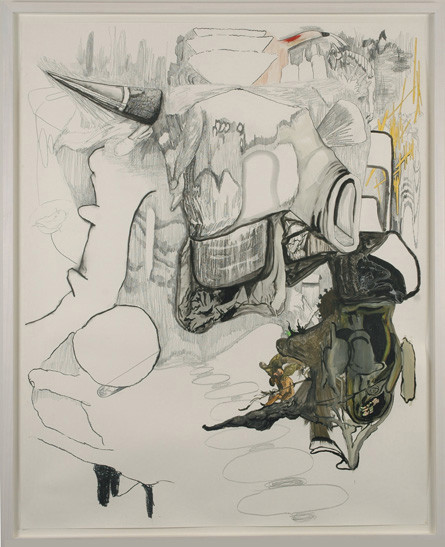 The Directors of Thomas Dane Gallery are pleased to announce the first exhibition in the UK of Portuguese artist Jorge Queiroz.

On the occasion of his solo show, Queiroz presents a vast new body of detailed drawings on paper including over forty small format works and five large works.

Exploring the full gamut of drawing techniques, the artist uses pencil, charcoal, oil stick, gouache and japanese ink to create densely populated, multi-dimensional landscapes. Queiroz’s pencil moves about his page in a graphic stream of consciousness. His fictional and psychological universes contain hybrid bodies and objects that inhabit indeterminable spaces, such that one’s eye may be lead from a bustling scene of mysterious figures in the foreground to a distant city on the same plane, in an impossible conflation of perspective.

This process of expansion and contraction occurs within the individual pieces as well as across the whole body of drawings. There is a relationship between the small and large works in the show; a fully rendered city in one work becomes a scaled-down fragment of triangles and squares within a large one. Each excessive drawing hints at a narrative that is constantly thwarted, yet a personal logic underpins them. The artist says that his drawings ‘have a narrative structure but a structure which is nameless, as if it were a building that is constructed in time from things that arise and vanish, although it doesn’t have a narration. What it does have is a structure’.

As such, these extraordinary drawings share something with the renegade surreal strategies of George Bataille, Alfred Kubin, Thierry de Cordier, Dennis Potter and James Joyce. However, Jorge Queiroz creates his own idosynchratic aesthetic terms to generate a wholly new fantastical experience.

Jorge Queiroz was born in Lisbon in 1966 and currently lives and works in Berlin. He studied at the Centro de Arte e Comunicação Visual in Lisbon and completed his MFA at the School of Visual Arts in New York. Queiroz recently had a major solo exhibition at Museu Serralves, Porto in 2007; other solo shows include Galerie Nathalie Obadia, Paris 2007; Horst-Janssen Museum, Oldenburg 2006, Studio Guenzani, Milan 2004 and Künstlerhaus Bethanien, Berlin the same year. He exhibited in the 4th Berlin Biennale 2006; the 26th Saó Paulo Biennial 2004; and Venice Biennale 2003. Residencies include Recollets, Paris 2007 and Künstlerhaus Bethanien, Berlin in 2004.
www.thomasdane.com