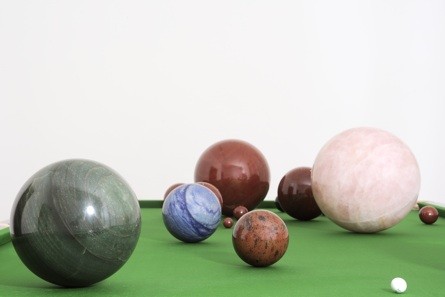 Thomas Dane Gallery is pleased to announce ‘Integrated Circuit’, our second exhibition of Brazilian sculptor, José Damasceno, four years after his solo debut in London. Best known for his playful manipulation of diverse materials from the mundane to the classical, he has created a series of sculptures and installations that probe the properties of scale, proportion and perception.

In the 2005 show ‘Imminent Circuit’ in Los Angeles, Damasceno created a set of over-sized billiard balls from semi-precious stones and positioned them on the floor of the gallery as if a game was about to start. A normal sized billiard rack hanging on the wall emphasized the dislocated sense of scale in the work. His new London exhibition features an adaptation of this earlier work, for which Jose has created a new set of over-sized balls, this time varying in dimensions and placed them on an actual snooker table. The balls are arranged in such a fashion that it seems we are witnessing the chaotic aftermath of the collision that was anticipated in 2005, or an impossible game waiting to be played.

The fascination for the object, often in its most surrealistic form, as well as a playful approach to sculpture-making characterise Damasceno’s work throughout the show. On the one hand, a giant eraser made of marble and wood, on the other, a series of wall-drawings made from thin metal segments and made to look like pencil lines; everything for the artist is a source of play and potential trompe-l’oeil.

Damasceno has included the most recent instalment in his Projeto Objeto series, which originally arose in 2006. This series uses the wooden vitrine as a consistent device for presenting or even re-presenting reality, allowing the artist to invent seemingly endless combinations of objects and material, arranged in and around the vitrine.

With his idiosyncrasies evident throughout, Damasceno exemplifies the new ‘open’ approach to sculpture that appeared in Brazil in the 1950’s and 1960’s, which operated between order and chaos, systems and improvisation – an approach reminiscent of surrealist practice. Damasceno’s subjective and yet systematic methods encourage the viewer to become something more than simply an observer.

Jose Damasceno was born in Rio de Janeiro, Brazil, 1968 where he continues to live and work. Damasceno studied Architecture at Santa Úrsula University, and was selected for the 51st Venice Biennale in 2005 before representing his country in the 2007 edition. He has had solo exhibitions at Reina Sofia, Madrid, Projeto Respiração, Fundação Eva Klabin, Rio de Janeiro and Culturgest, Porto, Portugal. Damasceno was included in the XXV Biennale de Sao Paulo in 2002, and the Biennale of Syd-ney in 2006.
www.thomasdane.com