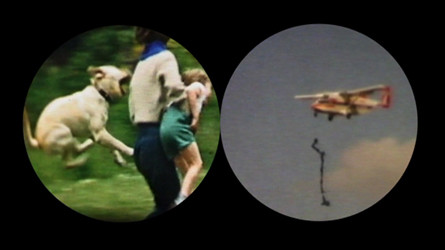 Thomas Dane Gallery is delighted to present fff a new ten-screen video installation by Kutlug Ataman with original music by British composer Michael Nyman. fff will be Ataman’s first major exhibition in London since Kuba (2005), his acclaimed Artangel project and his first commercial exhibition in a London gallery.
fff, an abbreviation of ‘found family footage’, consists of images drawn from home movies of the 1950s and 60s . This footage was borrowed by Ataman from the archives of two British families, the Fryers and the Howards, whose fathers were pioneering researchers into the effects of flight and g-force on pilots. Ataman has appropriated this material and overlaid it with original music composed by Michael Nyman, to create 10 short films, each with its own individual score. This large-scale, elegiac work is made up of quintessentially English vignettes from a seemingly lost age that first appear suffused with nostalgia. However, both Ataman’s point of view as an outsider looking in, and his particular conceptual approach reveal something altogether more complex. Ataman wanted the two distinct elements that make up a filmic narrative, the image (footage) and sound (the musical scores) to be created independently, effectively ready-mades engineered for appropriation. As such, his authorship is limited to editing and merging the two components, and in doing so reconstructs a new narrative from the outside in.
fff will be realised at Thomas Dane Gallery as a vast 10 screen installation, with an overlapping sequence of films beginning and ending at different moments, with several single films playing in canon at any one time. This complex montage of images and music appears as a monumental photograph album.
The exhibition will follow the one-night-only world premiere of fff, with a live performance by Nyman, at a Gala Event at the Whitechapel Gallery on 26 February.
fff is produced by the Institute for the Readjustment of Clocks, Istanbul. It was commissioned by the Whitechapel Gallery, Arts Council England and Calouste Gulbenkian Foundation.
Ataman’s work primarily documents the lives of marginalised individuals, examining the way in which people create and rewrite their identities through self-expression, blurring the line between fiction and reality. He was born in 1961 in Istanbul and lives and works between London and Turkey. He studied film at the University of California, Los Angeles (UCLA), and was nominated for the Turner Prize in 2004, the same year he won the Carnegie International Prize. He has just been awarded the first Abraaj Prize, which will be presented in Dubai in February 2009. Exhibitions during 2009 include a major exhibition of new work at the Lentos Museum, Linz, Austria in February and presentation of Kuba and it’s pendent Paradise at the Museum Ludwig, Cologne opening in August 2009.
Michael Nyman is a British minimalist composer, pianist, librettist and musicologist. He has written numerous scores for British filmmaker Peter Greenaway (including The Draughtsman’s Contract, 1982; The Cook, The Thief, His Wife and Her Lover, 1989) and for distinguished directors such as Jane Campion (The Piano, 1992), Neil Jordon (The End of the Affair, 1999) and Michael Winterbottom (Wonderland, 1999).
www.thomasdane.com