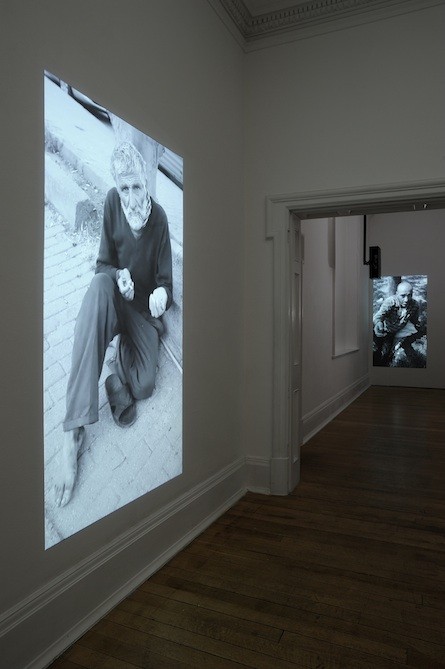 The Directors of Thomas Dane are pleased to present ‘Beggars’ 2010, a seven-channel video installation by artist and filmmaker Kutlug Ataman. The work was jointly commissioned with the 29th Sao Paulo Biennial and will be shown in the UK for the first time.

Presented in a darkened gallery, life-size figures act out in slow motion everyday dramas played out in the streets of Istanbul and indeed any city in the world. Some face the camera directly; two of the subjects are speaking, though unusually in a work by Ataman, there is no sound. The silence and austere presentation amplify the significance of subtle body movement to the level of performance. A cupping of the hand, the lilt of a torso, the raising of the eyes to the camera; Their expressive modes range from a submissive, even abject, repose to a persistent and tormented agitation. The economy of means also exaggerates the pathos of each individual and engenders discomfort in the viewer. It is difficult to look a beggar in the eye and there is an impossibility of fulfillment because an image cannot be helped. The beggars remain unreachable and we are left with the reflected light in a darkened room and a moving performance of human exchange.

In much of his work, Ataman uncovers stories of exceptional subjects – the socially excluded, the sexually eccentric, the criminal – and uses the medium of film to construct a meaningful social reality. Through his dedication to storytelling, he also challenges the assumptions of the documentary tradition – objectivity, truthfulness, transparency. Ataman joins documentary to fiction in a merging of testimony into screenplay – and indeed in this work two of the seven beggars may have even been actors, hired to perform.
www.thomasdane.com