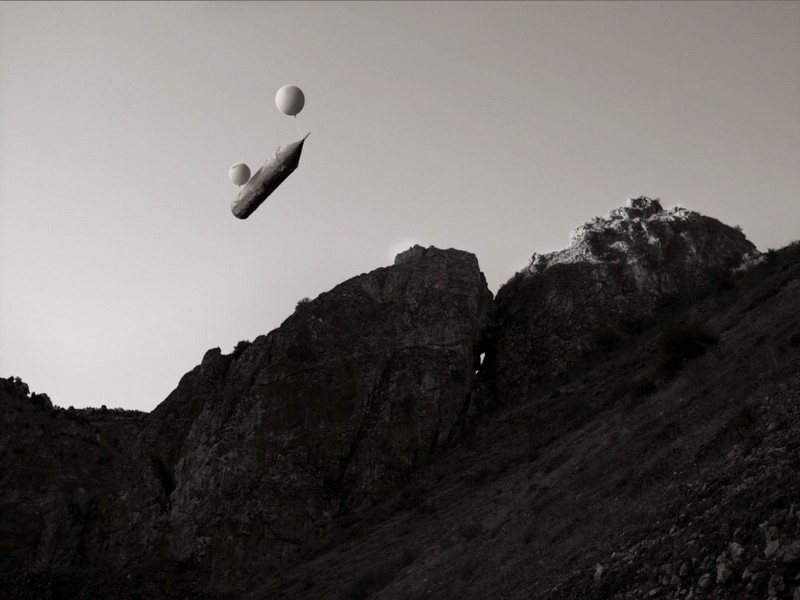 The Directors of Thomas Dane Gallery are pleased to present Journey to the Moon (duration 80 mins) an ambitious double-screen projection by Turkish artist and filmmaker Kutluğ Ataman.

The story is set in a remote village in Anatolia, one of the most archaic areas of Turkey, bordering Iraq. There, villagers are reported to have attempted space-travel on board a minaret converted into a rocket. The story is set in 1957, at the height of the Cold War 'space-race' and Turkey's push toward modernisation. In the tradition of Chris Marker's La Jetée (1962), and Nagisa Oshima's Yunbogi's Diary (1964), the film is entirely constructed with black-and-white still photographs (from a recently unearthed archive), and a villager as the narrator. In fact, the entire story is fictional, and its documentary evidence fabricated. This device is characteristic of Ataman's work, which focusses on how individuals and communities construct identities, fictional or real, through storytelling. The 'documentary' is set against interviews with well-known Turkish scholars - an aerospace lawyer, a propulsion engineer, an historian of modern Turkey, an animal-rights advocate, etc, each of whom comments from their professional perspective on the events of the story as if they were true.

Skirting the line between reality and artifice, Journey to the Moon alternates two narrative forms, the fictional and the real to the extent that they merge into a tale rich with revelations, both individual and collective.

Journey to the Moon is the centrepiece of a large body of work, the Mesopotamian Dramaturgies (2009-2011), which revisits the recent history of that region, the 'cradle of civilisation', to focus on the tensions between tradition and modernisation. The series was premiered at the Lentos Museum, Linz, Austria in 2009 and was the inaugural exhibition of the Maxxi Museum, Rome in 2010. Kutluğ Ataman received his early education in Istanbul followed by an MFA in film studies at UCLA from which he graduated in 1988. He established himself as a film-maker with Serpent's Tale (Karanlık Sular) (1994), and has gone on to make two further features: Lola+Bilidikid (1998) and 2 Girls (2005). In 1997 he was invited to take part in the Istanbul Biennial with the eight hour, documentary-style work "kutluğ ataman's semiha b. unplugged". This was the start of an art practice which has run in parallel with his work as a film-maker. His epic Kuba, (2004) commissioned by Artangel, London is one of the most admired and widely shown installations by any artist working with the moving image. He has won many awards for his films, was nominated for the 2004 Turner Prize, won the Carnegie Prize in the same year and the Capital Abraaj Prize in 2009. In 2011 he received the European Cultural Foundation's Princess Margriet Award. His works are in collections such as MoMA New York and the Tate, and have also been shown in the major Biennials, including Venice and São Paulo, and at Documenta.
www.thomasdane.com