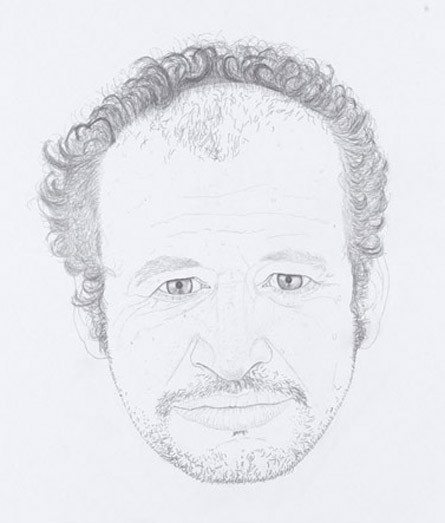 Thomas Dane Gallery is delighted to present 45 drawn portraits by Michael Landy, a new body of work which will be shown at his forthcoming exhibition.

Meticulously rendered simply in pencil on paper, Landy’s series of portraits began as intimate sketches of his immediate family as a means of reconnecting and spending time with them. Each portrait has taken at least two full days of sitting before the artist in extremely close proximity. In Landy’s vast studio there sits only an easel, a bench for the artist and a chair for the subject. Painstaking in his attention to detail, Landy has captured the sitter’s every wrinkle and blemish in stark, intricate graphite drawings of brutal honesty. Studying each face for hours on end, Landy challenged himself to replicate each detail with complete empirical detachment. The finished portraits, drawn without necks or shoulders, float ethereally on the page. Exercises in pure representation, the drawings testify to the artist’s extraordinary skills as a draftsman.

Since April, Landy has been drawing someone every day, for eight hours, seven days a week. He expanded his range of subjects from family and close friends to drawing fellow artists such as Michael Craig-Martin, Rebecca Warren and Peter Blake, leading figures in the contemporary art world including Norman Rosenthal, Catherine Lampert, Richard Riley and Ivor Braka, collectors such as Anita Zabludowicz as well as people in his everyday life including the landlady of his local pub, Sandra Esqulant.

Michael Landy was born in 1963 in London, where he continues to live and work. Re-cent solo exhibitions include Three Piece at Sabine Knust, Munich, 2008; Man in Ox-ford Street is Auto-Destructive at Sherman Galleries, Sydney; and Michael Landy: H2NY at Alexander & Bonin, New York in 2007. His 2001 monumental installation for Artangel, Break Down, was a systematic destruction of his possessions in a former department store in London. In 2004, he created Semi-detached, a full scale model of the front and back facades of his parents’ house, shown at Tate Britain. His work has been in numerous group shows since 1989, including the 1997 Sensation exhibition at the Royal Academy, London and Brilliant: New Art from Britain at the Walker Art Center in 1995. Michael Landy’s works are held in many public institutions including the Tate Collection, London; the Arts Council England; and the Museum of Modern Art, New York.
www.thomasdane.com